The 24-year-old Scarlet has only six caps but was instrumental as Wales crushed Scotland last weekend.

"When Alun Wyn Jones and the guys go down for breakfast on Saturday, they'll be looking at him thinking, 'Can this kid handle the pressure?'" said Jones.

Jones added that Patchell, who made his first Test start at fly-half against the Scots, would not have been involved in a match as intense as this Saturday's meeting at Twickenham.

Patchell has come into the side with Dan Biggar and Rhys Priestland missing with shoulder and hamstring injuries respectively.

"It's easy to play when the ball is on the front foot and going from side to side, but when it gets a bit cut and thrust, nip and tuck, this will be a proper Test - then we will see if Patchell has the bottle to handle it," Jones added.

"He hasn't played much Test rugby at all. He is going to have [Chris] Robshaw at him, [Owen] Farrell at him, [Danny] Care at him - all guys that have played a lot of Test rugby."

Jones also revealed that he had complained to World Rugby about Wales skipper Alun Wyn Jones' attempt to prevent Scotland taking a conversion before the video official could review their late consolation try last weekend.

"I thought that was right out of order," said the England coach. "I've said something to World Rugby about it, I feel that strongly.

"All we say is just to be respectful. At times players lose their cool, but that was a contrived bit of behaviour."

Wales have named the same side that beat Scotland 34-7, with seven of the starting XV having never played an international at Twickenham before.

Wales forwards coach Robin McBryde refused to get involved in any verbal jousting, laughing off Jones' comments, and backed Patchell's ability to deal with the pressure of the occasion.

"I'm not going to try, I know better," he said. "He's obviously got a few things to get off his chest and hopefully he'll feel better for it.

"Anyone wearing the number 10 jersey is going to expect to be put under pressure.

"Patchell is surrounded by players from his own region [Scarlets] and that familiarity under the pressure of international rugby... hopefully his game will stand up. We saw last Saturday it was good to watch."

It lacks a bit of class from Eddie Jones for me. Maybe he is nervous about Rhys Patchell and his game-winning ability at 10.

Patchell is a bright, intelligent young man. He was coming up through the Cardiff Blues academy when I was there and he will relish being put in the limelight.

On Saturday, he will have his club team-mates around him, with only Worcester wing Josh Adams preventing a Scarlets clean sweep in the backline. It is a step up certainly, but that will help him settle.

The Welsh players will be used to those sort of verbal barbs, though - Warren Gatland does similar often enough.

I think everything up until when Jones questioned Patchell's bottle was OK. All the rest of it was a statement of fact. But suddenly, by talking about his bottle, he is looking Patchell in the eye and calling him out. That is personal.

You are seeing the true Eddie Jones - a very good coach, but a spiky character who cannot resist throwing hand grenades.

I think it is calculated to put the pressure on his own players as much as Patchell. 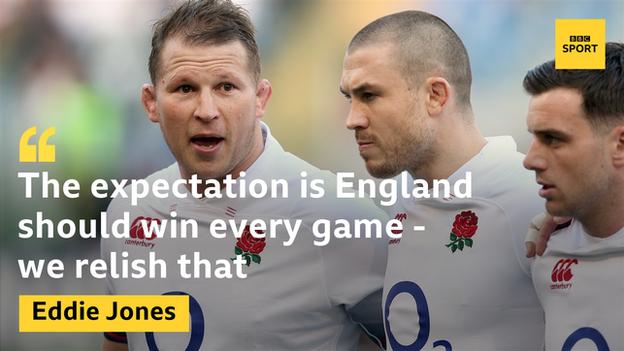 'Twickenham is going to be different for them'

England boss Jones believes the relative ease of Wales' win over Scotland - their fifth in seven Tests - means they come into the game "confident and cocky", but also with added pressure.

"They had nothing to lose, and they played with a great freedom. Now they have expectation, and they have to cope with that," Jones told BBC Sport.

"It's going to be different - they have a number of young players, we have an experienced side who love playing in front of 82,000 people that's going to pose a completely different question.

"Wales see themselves on a self-proclaimed roll at the moment. So we will see how they deal with Twickenham, and deal with us."

Having won back-to-back Six Nations titles, Jones says his side are happy to live with their own weight of expectation from England supporters.

"Having been an England coach for two years, the expectation is we win every game - that's something we carry around with us every time," he said.

"We relish that. We don't care if we are favourites or underdogs."