Before the Six Nations we invited you to select your Greatest Scotland XV.

We gave you a choice of four Scotland greats for each position, and it certainly sparked some passionate debate online and on social media.

More than 45,000 people selected their own team, and we can now reveal Scotland's Greatest XV as decided by you.

Full-back was arguably the toughest selection, with Stuart Hogg claiming 48% of the vote to land the 15 jersey ahead of legends Gavin Hastings and Andy Irvine.

Memories of his Grand Slam-winning try in 1990 means Tony Stanger retains a special place in the hearts of Scotland fans, and with 60% of the voting he takes a spot on the wing.

At 13, Alan Tait, a Five Nations and Lions series winner, garnered 40% of the vote but still lost out to Jim Renwick, the great Hawick centre who made a then-record 52 Scotland appearances and toured with the Lions in 1980. 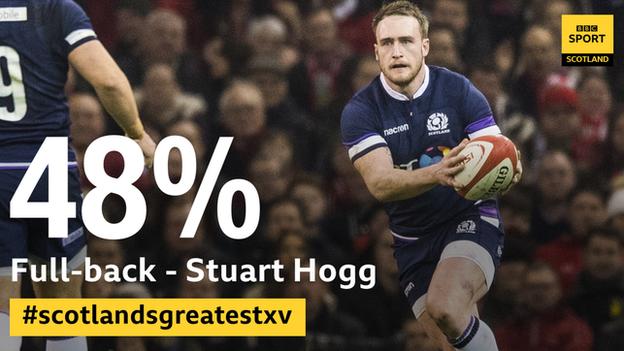 The centre combination is completed by Scott Hastings, who was voted in by a comfortable margin ahead of Ian McGeechan.

Who could ignore the feats of Scotland's record points-scorer Chris Paterson? Not you, it seems. He claimed the number 11 shirt ahead of Kenny Logan.

Fly-half in any team is always a position that provokes huge debate and this XV was no different. The creative fulcrum in this fantasy team is none other than the current Scotland head coach Gregor Townsend with 56% of the vote, beating his protege Finn Russell and the imperious John Rutherford. 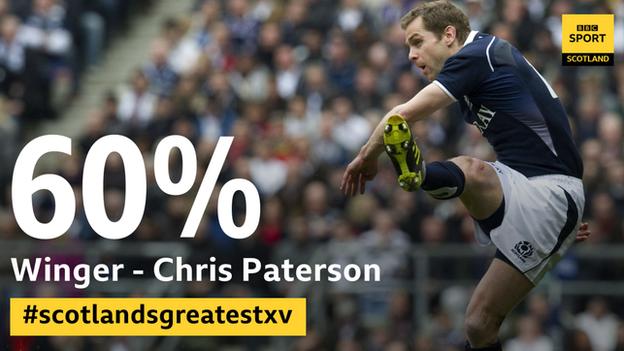 Scotland has a rich history of producing quality scrum-halves, and Gary Armstrong, Grand Slam-winner in 1990 and Five Nations champion in 1999, takes the number nine jersey ahead of Roy Laidlaw and his nephew, the current Scotland scrum-half Greig Laidlaw.

Jim Telfer is perhaps best remembered by the younger generation for his coaching feats with Scotland and the Lions, but his pedigree as a player was sterling, and he gets the nod at number eight ahead of Simon Taylor.

At open-side, the current Scotland captain John Barclay misses out to another of the heroes of 1990, Finlay Calder, who captained the Lions on the successful 1989 tour of Australia. 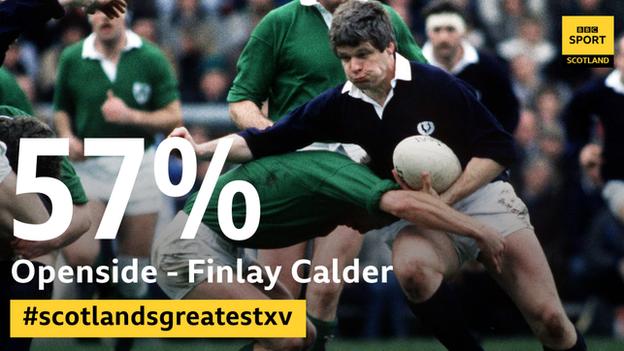 Completing a formidable back-row unit is John Jeffrey, whose 33,238 votes represented 74% of selections for the blind-side berth, the most emphatic of all the picks.

The second-row positions were hotly contested. Gordon Brown and Scott Murray, two of Scotland's finest locks, generated over 25,000 votes between them, but lost out to Richie Gray, one of only two current players to make the team.

Partnering Gray in the engine room is Doddie Weir. One of the most popular figures in Scottish rugby history, it comes as no surprise that he received over 28,000 votes. 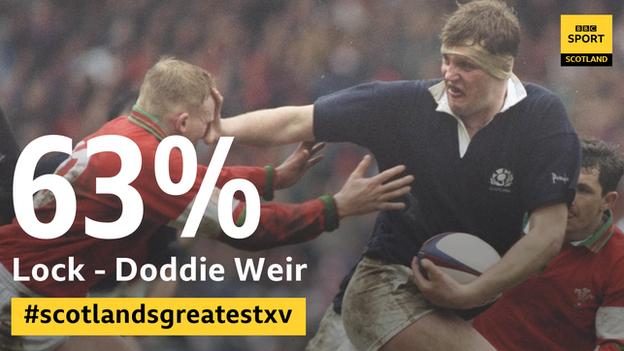 Some great players missed out on selection in the front row. Some will wonder how the likes of Iain Milne and Sandy Carmichael could fail to be selected at tight-head, but that honour goes to Euan Murray.

At hooker, Scotland's all-time record caps holder Ross Ford received substantial support with 30% of the vote, but Colin Deans, one of the stalwarts of Scotland's 1984 Grand Slam-winning side, takes the number two jersey. 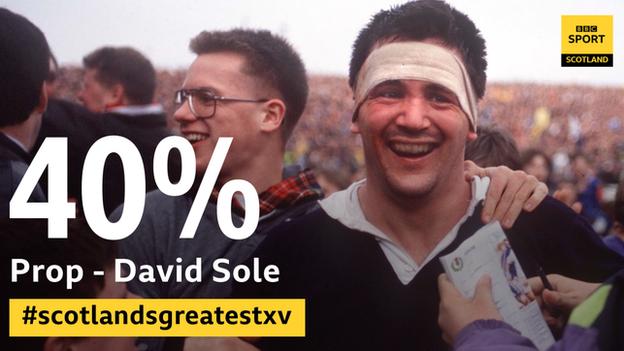 Ian McLauchlan and Tom Smith, both integral parts of Lions series-winning teams, would both make fine additions to this team. However, memories of David Sole leading the charge against England in that historic 1990 Grand Slam decider are still strong. The former captain takes the number one jersey.

If you do not agree with the team selected, you can still select your own 15 below to share on our social media platforms.

Choose 15 players for your greatest ever Scotland rugby team.