England lost their fifth Test match in a row as South Africa wrapped up the series 2-0 with one match to play.

The tourists once again started well and raced into a 12-0 lead with Mike Brown and Jonny May scoring fine tries.

The Boks fought back as a Duane Vermeulen try and Handre Pollard's boot gave them a one-point lead at the break.

A penalty try saw the hosts stretch well clear and they kept England scoreless in the second half.

It is the first time since 2014 they have lost five in a row - a sequence that saw them beaten four times by New Zealand and once by South Africa.

The final Test of the series takes place next Saturday in Cape Town.

Deja vu all over again

History doesn't repeat itself but it often rhymes, so the saying goes, and that was the case for much of the first half.

In the first Test in Johannesburg England raced into an early 24-3 lead before ultimately losing 42-39, and the pattern was mirrored in Bloemfontein.

It was a more aggressive and abrasive 40 minutes than the opener last weekend, with England's forwards keen to get stuck in - and often transgressing as a result.

Billy Vunipola - who was to be forced off by yet another injury just before half-time - made the initial impact, hitting and spinning to make ground in heavy traffic, before crisp passing enabled May to give Brown a simple run-in for the first try.

They soon added a second as quick hands in midfield - including a batted pass from the juggling Brown - saw May scorch 40 metres, but once again they could not hold on to a significant early advantage.

Inspired by their big runners up front, the Boks came to life and duly led by half-time.

Vermeulen was once again a massive figure at number eight and his powerful score - he side-stepped Billy Vunipola before powering past Maro Itoje - got the scoreboard ticking over and heralded what was to come.

Pollard's boot did the rest as the hosts led 13-12 at the break.

England were their own worst enemies, with some petulant indiscipline from Mako Vunipola and Itoje aiding the South Africa cause, and they also threw plenty of handling errors into the mix.

They had to start the second half better than the hosts, but two early knock-ons halted their attempts to generate momentum and effectively killed off their challenge.

Things go from bad to worse for England

A huge South Africa scrum, which saw Kyle Sinckler pop up under the pressure and immediately be replaced, earned them a penalty try and a third Pollard penalty was scant reward for a dominant third quarter.

England boss Eddie Jones rang the changes in an attempt to inject some life into his out-gunned charges, with Danny Cipriani returning to the Test stage for the first time since 2015 and immediately looking a greater threat than Ford at 10.

But yet more errors and poor discipline - of which a blatant hand on the ground from Nathan Hughes which brought a yellow card was the worst example - ensured there was only ever going to be one winner.

After the final whistle had gone things went further downhill for England, with Brown and Joe Marler confronting fans as they walked down the tunnel.

Man of the match - Duane Vermeulen

They were just woeful - the BBC pundit's view

"There were a few rumours I heard last week about what's going to happen going into the World Cup - has Eddie Jones lost the dressing room? Has he lost Twickenham?

"The wheels are wobbling, big time. There have been far too many, not just losses, but far too many [bad] performances - they were just woeful today, in the second half England were absolutely awful.

"If you're going to give Danny Cipriani a shot, what are you doing only giving him 13 minutes when the game's done? Why not put him on with 30 minutes left, and change the game up. England had no structure, no attack. It was easy for South Africa."

"Plenty of talent and ability in this England side, of that there is no doubt. Need to understand why discipline is so bad - root cause? Need to get the best out of Itoje, Vunipola's again. Fine margins & sweeping statements of apocalyptic catastrophe don't get us anywhere!"

We want to learn lessons now - what the captain thinks

England captain Owen Farrell on Sky Sports: "We lost momentum in the second half of the first half again. We have to make sure we look back and see where we went wrong. We weren't composed enough. We have to learn from it.

"We want to learn lessons now. The 2019 World Cup is part of the big picture but we want to start winning now."

What did the coach make of it?

England boss Eddie Jones: "It was pretty much like last week, in the first 10 minutes we played some superlative rugby but we just don't handle the key moments in the game.

"[We gave away a] different sort of penalties this week, set-piece penalties, last week it was a lot in open play. We're a bit like a old car at the moment - you fix one bit and another part breaks down."

"We're missing 25 players from this tour, the players here are making a great fist of it and we're going to keep at it and keep working." 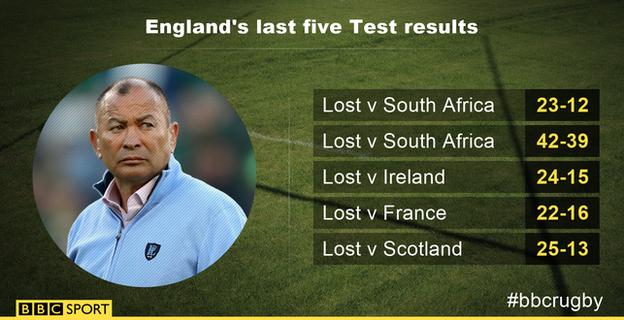 The fans' reaction on social media

Tom McCarron: England players refusing to do post match interviews. Disgraceful. This team dressing room is in a bad way.

Ollie: Seriously at what point do we start asking questions of Eddie Jones? Discipline has got worse and worse each game, same mistakes made and no improvements. 5 losses in a row and likely to be 6. Sackable form.

Chris Moule: poor execution, poor decision making, poor temperament, poor coaching - subs on too late. Coach has to go NOW, though I think it is already too late for the WC.