Saracens continue to bask in the glow of being crowned inaugural Premier 15s champions, but defending their title in 2018-19 will not be straightforward.

With the league ring-fenced for the first three seasons, the other nine sides are all catching up having travelled the massive opening-season learning curve.

The usual suspects of Harlequins and Wasps will be pushing for top honours, but others such as Loughborough or Bristol could cause an upset, while Worcester will be hunting for their first-ever league victory.

Losing Ireland back-rower Claire Molloy to Wasps will be a big loss but securing the services of England tight-head Sarah Bern from neighbours Gloucester-Hartpury is a bit of a coup.

Games will be played at Shaftesbury Park this season, the home of Dings Crusaders, and a tighter link-up with the men's team has seen their head coach Pat Lam meet the team and fly-half Ian Madigan take a session.

Women's head coach Kim Oliver will be happy things are moving in the right direction off the field - if they can produce the goods on it.

There is no disguising the significant loss of 2014 England World Cup captain Katy Daley-Mclean, who was part of the lifeblood of the club, but a smart move sees the Sharks' head of programme Justin Loveridge snap up 23-year-old Scotland centre Lisa Thomson.

She is one of eight Scottish women contracted to the Scottish Rugby Union and geographically the club will work well for her for Scotland training.

The Sharks will want to see a big step up in performance if they are to become the league's northern powerhouse.

The club have brought in new head coach Giles Heagerty to breathe fresh ideas into the side, along with 17 new squad players.

The standout signing is Wales wing Lisa Neumann, but the club will also hope to see their youngsters stepping up - in particular number eight Sarah Beckett, who starred for England Under-20s on their summer tour to Canada. 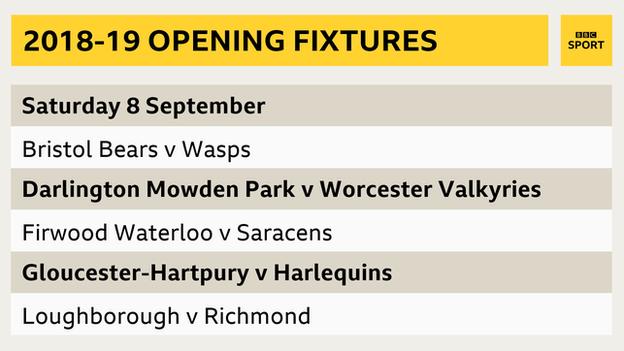 Head coach Susie Appleby has built links with the men's set-up and men's head coach Johan Ackermann delivered a talk on culture to the women's squad.

The signing to catch the eye is Scotland prop Katie Dougan heading to the West Country.

Millie Wood will be a bigger presence having left the England sevens programme, although Abi Burton and Ellie Kildunne heading in the opposite direction will be big losses while on sevens duty.

But it is not just the player signings that will excite Harlequins fans, with former England and Quins scrum-half Amy Turner joining the coaching set-up.

Quins will still be smarting after losing last season's final to Saracens and will be looking to go one better in 2018-19.

Loughborough mean business this season and their signings show their ambition.

While England fly-half Katy Daley-Mclean is the headline act, the additions of England forwards Justine Lucas and Jo Brown, along with Scotland's Sarah Ann Bonar, all pack a punch.

Their success shocked many last season, having started from scratch, but they will be hunting a place in the play-offs this time around.

Richmond have a new coach in Jonathan Griffin who joins the women's set-up from Richmond's men's team.

As well as new signings such as former England centre Vicki Jackson and the USA's Jess Wooden, he has also brought in former Ireland and Richmond player Lynne Cantwell as player performance mentor.

Having been the dominant force in women's rugby for many years, they are keen to return to the glory days and are targeting a top-four finish.

Another coaching change as Rob Cain has left to become head coach of the USA. Alex Austerberry has come in, but is familiar with the club and the players having coached many of them as they came through age-group rugby.

As champions, they are the team to beat this season.

England's loss is Wasps' gain this season as Danielle Waterman and Rochelle Clark will still be pulling on a Wasps shirt despite retiring from international rugby.

The addition of Ireland back row Claire Molloy is key. Having captained Ireland, the A&E doctor will provide priceless experience to the Wasps squad.

They have also added England pair Amy Wilson-Hardy and Katie Mason, so do not expect the same slow start to the season that Wasps produced last year.

There is plenty to be excited about, including the return of England wing Lydia Thompson, who has left the England sevens programme, and England prop Laura Keates returning to fitness.

Ultimately nothing can be as bad as last season, when the Valkyries finished with no wins and only one draw to their name - onwards and upwards.