Edinburgh captain Stuart McInally believes the current squad is "as strong as we've been" during his eight years at the club.

The Scotland hooker, who joined the capital side in 2010, also believes there is more to come ahead of Saturday's Pro14 derby with Glasgow.

"Not just on the pitch but off the pitch as well," said the 28-year-old.

"We've got a proper set of foundations that the club can grow on and I can see us improving every year."

Edinburgh approach the first of the two festive derbies - Glasgow host the second on 29 December - buoyed by a "massive" win at Newcastle last weekend, which puts them "in a great place" at the top of a European Champions Cup pool that also includes Toulon and Montpellier.

"I've been here eight or nine years and this is one of the strongest squads we've had for a long time," added McInally.

"We've got good forwards and excellent backs now as well, who can finish tries."

Head coach Richard Cockerill made a significant impact in his debut campaign but away form has been a problem so far this season, with all six league road trips ending in defeat, leaving them in fifth spot in Conference B, seven points behind Ulster in the third play-off place.

However, Edinburgh have enjoyed six wins from six on their own turf in all competitions and beat Conference A leaders Glasgow twice at Murrayfield last term.

"The boys are really proud of our home record and that's not something we'll give up easily," said McInally.

"Glasgow have got quality right through the side. They have a few injuries at hooker but Grant Stewart is an excellent player coming through.

"We know we'll need to be at our best but we love playing in these games and we know if we can pick up some points over the next month or so we're going to be pushing for that top-three spot." 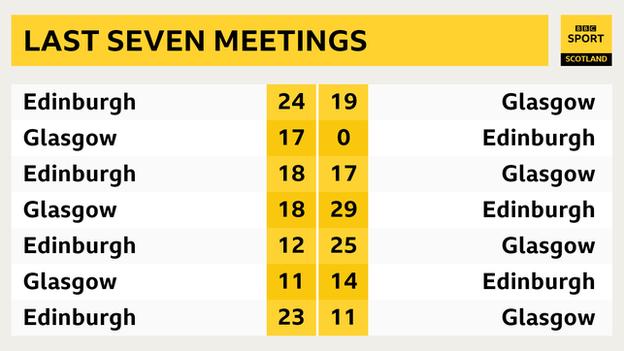 Cockerill, 48, is under contract until 2021 but has recently been linked with the England job.

"It's no surprise that he's getting recognised for what he's doing," said McInally. "We'd love to keep him for a long time.

"He's a very successful coach. His track record at Leicester speaks for itself and he knows how to get the best out of players.

"Cockers just gives us belief. You trust in what he says because he's been in the game for such a long time and done so much."