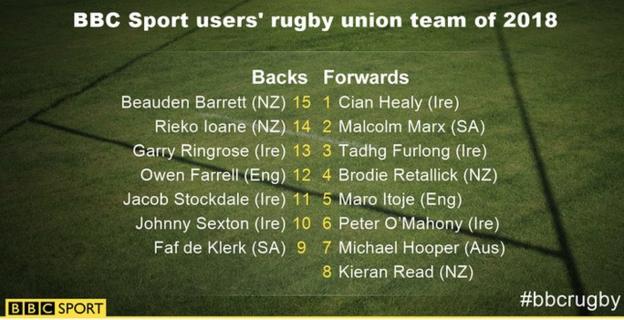 Ireland dominated the rugby landscape in 2018, but how many of their players made it into your team of the year?

Was there room for England's Owen Farrell? What about New Zealand's star fly-half Beauden Barrett?

BBC Sport users selected more than 60,000 teams of the year in five days over Christmas and we've combined them to make your definitive team of 2018.

Having won world player of the year, it's no surprise that Johnny Sexton was selected by 61% of you in the number 10 jersey, but it was his Ireland and Leinster team-mate Tadhg Furlong who took the top honours, making 92% of your teams.

Another Irishman, Peter O'Mahony, comes in second, having been picked by 73% of you, with Cian Healy your selection at loosehead prop.

New Zealand continue to have a healthy presence in the XV, contributing the same four players as in 2017, with lock Brodie Retallick selected in 68% of teams.

But fly-half Beauden Barrett is forced to switch to full-back, and Rieko moves to the right wing after with more than 40,000 votes.

England fly-half Farrell also makes the cut, after being selected in 57% of teams, but he plays at inside centre for the second year running.

In a marked difference from the Rugby Union Weekly team of the year - chosen by former England international Ugo Monye and BBC rugby union correspondent Chris Jones - a second Englishman also makes your XV as Maro Itoje slots in at lock.

A resurgent South Africa contribute two players in the form of hooker Malcolm Marx, who pipped Rory Best after being picked in 31% of teams, and scrum-half Faf de Klerk, who polled 5,000 more votes than Ireland's Conor Murray and was selected by almost half of voters.

Australia manage a lone entry as Michael Hooper gets the nod at openside flanker for the second consecutive year, but despite a second-place finish for Wales in the Six Nations, there are no Welshmen or Scotsmen in your XV.

You can listen here to find out how and why the experts' choice differed to yours in the Rugby Union Weekly's team of the year podcast, and tune in to the podcast in the New Year to find out the panel's reaction to the team you selected. 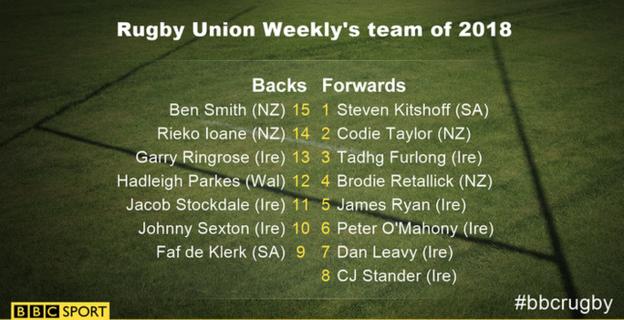