It's fair to say that the rugby relationship between Scotland and Ireland has had to weather a few storms over the years.

People with long memories will go back to 1972, when the Scottish Rugby Union plunged their Irish counterparts into chaos by refusing to allow their team to travel to Dublin to play a Five Nations game, citing security fears amidst troubled times.

Ancient history, yes. But that's the thing about history - there's quite a lot of it. In the 2007 Six Nations game at Murrayfield, the then Ireland coach, Eddie O'Sullivan, accused an unnamed player (turned out it was Nathan Hines, the Scottish lock) of deliberately trying to choke Ronan O'Gara, the Irish fly-half.

Hines was cleared of any wrong-doing, both by the citing commissioner and by O'Gara himself who said nobody had tried to throttle him. Years later, when Edinburgh were looking for a coach and the available O'Sullivan was mooted for the job, the SRU quietly let it be known that 'Chokegate' made the Irishman persona non grata regardless of his credentials.

There's been other, more recent, narkiness between these rugby nations, other reasons why Scotland will be desperate to put one over on Ireland on Saturday and why Ireland will be just as desperate to do a job on Scotland.

The edge between Glasgow and Munster had been rising slowly for a few years before it really became bitter. In 2013, Niko Matawalu was accused - and cleared - of biting Donncha O'Callaghan, the Munster lock, in a tempestuous game at Scotstoun.

The verdict declared that while Matawalu's teeth had come into contact with O'Callaghan's arm and had caused injury, it was accidental. In the same match, Conor Murray was cited - and cleared - for striking an opponent with an elbow.

It was in December 2016 when things became really fiery. In their first game after the tragic death of their coach, Anthony Foley, Munster hosted Glasgow in a Champions Cup tie in Limerick.

In the early minutes, Keith Earls tip-tackled Fraser Brown and got sent off. Earls aimed a volley of abuse at Brown as he left the field, later accusing him of milking the incident. "I felt he could have done a bit more to save the impact," said the wing. "I thought he was going for it a small bit, to be honest with you."

Brown called Earls' comments "disrespectful" and "disappointing." Things didn't get any better between the two sides after that.

In January 2017 there was an eruption after Glasgow played Munster in another Champions Cup game. Conor Murray accused three players, Jonny Gray, Josh Strauss and Tim Swinson, of cynically targeting his left leg while he was in the process of kicking with his right.

Munster claimed that the offences were repeated throughout the game. Glasgow said, privately, that there was a serious amount of over-egging and deflection going on.

Murray said: "From the smack talk, if you want to call it that, the truth slipped out, players saying, 'You'd better watch out for that knee'. Well, that's not where I come from, not how I was brought up, not the values of sport I have."

Heroes of Munster's past weighed in. "It was an absolute disgrace," said Alan Quinlan, the former flanker. "It was scandalous and appalling,' said Ronan O'Gara. "Going after someone totally exposed with one foot planted is a disappointing new low in rugby."

The Glasgow coach was Gregor Townsend, who said he disagreed with Munster's analysis of what went on while keeping the rest of his thoughts to himself.

'Too mouthy, but they can't back it up'

Before the 2017 Six Nations game at Murrayfield, Ronan O'Gara had a bit of a moment on national television that would boomerang back and hit him square between the eyes.

As the Scots were being introduced to Princess Anne, O'Gara stated from the studio that he hoped "Ireland hammer them because of the way Scotland behaved during the week."

Who were these Scottish blowhards that had annoyed the Munsterman so grievously by predicting home glory? It's hard to know. Not even the combined investigative powers of Miss Marple and Inspector Morse would come up with evidence.

"We were brought up on the fact that you worked hard and talked afterwards," O'Gara added, to the undoubted incredulity of those who followed his glittering career closely. The Scots, he said, were "too mouthy, but they can't back it up."

This notion of untrammelled Scottish bombast was an iffy one, but not as iffy as the Irish defence, which shipped 21 points to blow a hole the size of a crater in O'Gara's forecast. Scotland went on to win the game and immediately burst the talk of a 2017 Irish Grand Slam.

'The players got anxious' after 'Busgate'

After that 2017 game Joe Schmidt, unprompted, raised the issue of Ireland's team bus being delayed on its way to Murrayfield. The police had taken them a different route on Saturday compared to Friday, he said.

Their late arrival, made later still because a pipe band had slowed them down in the grounds of the stadium, meant their warm-up time was reduced from their usual 45 minutes to 25 minutes.

Schmidt didn't say he smelled a rat when the police took his players on a different route on match day but the way he continually raised it was a bit of a hint.

According to former Ireland player O'Callaghan, the late arrival wasn't a small thing, it was a "big, big thing". Part of Ireland saw 'Busgate' as embarrassing excuse-making, other parts thought there was something in it.

Five days later - and despite Conor Murray, Robbie Henshaw and Simon Zebo pouring cold water on the conspiracy - Schmidt was still talking about it. "There was a bit of anxiety at not having the full (warm-up) period," he said. "The players got anxious."

Unsurprisingly, to the Scots, this seemed like the most glaring example of sour grapes. It came up again when Tadhg Furlong was asked three different questions about it at his press conference. Furlong didn't look wholly at ease in revisiting the episode.

The footnote came in June when, hey presto, Ireland were again delayed on the way to a Test match, this time in Sydney ahead of the final game in a three-match series that was delicately poised at 1-1.

On the Friday the bus to the Allianz Stadium had taken 13 minutes. On the Saturday, after being held up by an LGBT parade, it took 30 minutes. Afterwards, having won the Test that secured the series, Schmidt didn't seem to have much of an issue with the shortened prep time.

When Ireland's bid to host the 2023 Rugby World Cup was beaten by France, there was rancour aplenty. To the Irish bid team, the reason for the failure was a betrayal by their Celtic cousins, Scotland and Wales, who voted for the French and South African bids respectively. Had those two votes gone Ireland's way, the bid might have won.

The gist of the reaction was this: For two years, Scotland had given Ireland every reason to think that they were going to vote with them, but then changed their mind late in the day. Another example, then, of Scotland letting down the Irish.

"They did it in 1972 and they've done it again," wrote one columnist. "Why Ireland feels betrayed" was a headline elsewhere.

The version of events on the other side of the argument was somewhat different. The gist this time was that Ireland had been told multiple times that the SRU vote would go to the bid that generated the most money for the global game.

"Ireland went around telling everybody that they were going to blow everybody else out of the water financially," said a source close to the negotiations, "but they were 78 million quid short of France."

Behind the scenes there was tension. The IRFU said that the SRU changed their vote and they were disappointed but others, on the opposing side, said that the IRFU had been outflanked and humiliated by France, and were now seeking to save face by pointing the finger at the Scots and the Welsh.

Time has passed, but below a surface cordiality it remains a sensitive subject in what has become a challenging relationship between these two rugby nations. 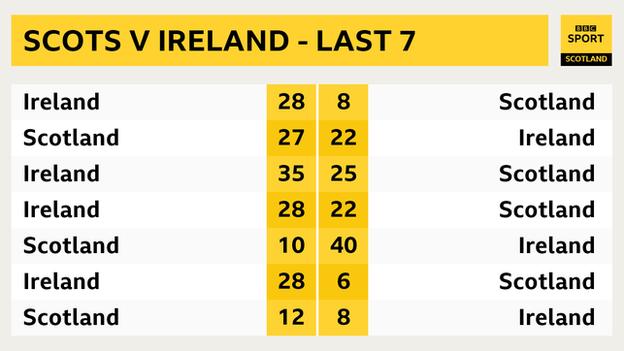