England's form is so strong they would beat the world champion All Blacks, says Wales legend Shane Williams.

England, ranked third in the world, have beaten Ireland and France by 12 and 36 points respectively in their first two Six Nations matches.

They play Wales, who have also won two matches, in Cardiff on Saturday.

"England are playing the best rugby in the Six Nations at the moment. It would take a hell of a team to beat them," Williams told BBC Radio 5 live.

"If the All Blacks came to Twickenham on Saturday, I think that England would win - that is how good I think they are."

England have won only seven of their 41 matches against New Zealand and lost for the sixth successive time against the All Blacks in November.

However, Williams - who scored a record 58 tries in his 87 international appearances between 2000 and 2011 - says that Wales are capable of causing an upset.

Their wins over France and Italy in the first two rounds have taken the current team level with a century-old record of 11 successive Test victories.

"Wales have not shown their hand at the moment and at home they are a different animal," Williams added.

"This match reminds me of 2013 when England were coming for the Grand Slam and Wales put 30 points on them. I don't think that is gong to happen on Saturday, but I really think any team could win this."

Former England wing Mark Cueto believes victory in Cardiff at the weekend could pave the way for only England's second Grand Slam since winning the World Cup in 2003.

"If England can overcome Wales this weekend, the Grand Slam is on without presuming too much," said Cueto.

"They have got the tougher teams behind them and you would expect them to beat Italy and Scotland both at home given their form. That makes this game the biggest.

"It all comes down to matching the intensity of the Welsh - they always raise their levels to face the English. If we can match that, the form should hopefully come through."

'Ferrari' May ready to rev

Attack coach Scott Wisemantel says the 28-year-old Gloucester back contrasts and complements Jack Nowell, who is on the other wing in the absence of the injured Chris Ashton.

"They are pretty diverse players," Wisemantel said. "We periodise Jonny's week as the Ferrari.

"So the Ferrari gets put in the garage, we put the covers on the Ferrari and give it a good grease and oil change.

"With Jack, you get work-rate, you get energy. He just loves being on the pitch. He's got unbelievable footwork, he would beat you in a phone box. He has a high work-rate and really good gas out of the blocks.

"They are very different characters but the one thing they both bring is lots of energy.

"They both love it when they are on the pitch but in the lead-up, they are totally different. They come together in games." 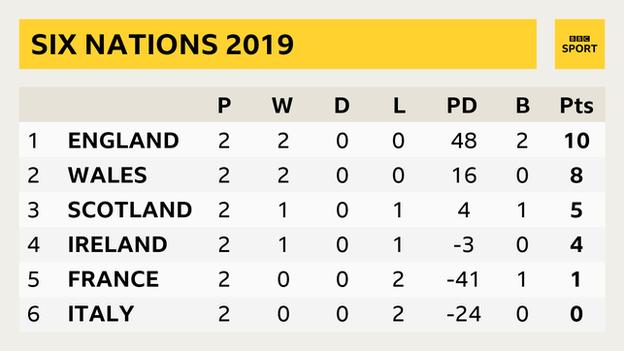