But Wales came barrelling back and took the lead with 13 minutes to go when second row Cory Hill smashed over after a relentless series of drives.

And with replacement Dan Biggar taking control, Josh Adams sealed it at the death as he claimed his fly-half's cross-field kick to send the Principality Stadium into ear-splitting ecstasy.

If Wales can beat Scotland in Edinburgh in two weeks' time only Ireland in Cardiff on the final day of the championship will stand between them and a first Grand Slam since 2012.

But this will go down as another masterclass from their coach Warren Gatland, as England were unable to get close to their form of the opening two rounds.

Curry and chips define first half

It was a frenetic start on an afternoon warm enough to be late April rather than February, both sides looking to kick, Kyle Sinckler charging into tackles with relish as the songs rolled down the stands.

Owen Farrell and Anscombe exchanged penalties and then England struck again, Curry picking and going off an unguarded ruck seven metres out as Justin Tipuric dallied with Ben Youngs.

Farrell's conversion from in front made it 10-3 and the home crowd fell uncharacteristically quiet, the score doubly chastening for Wales after Courtney Lawes had robbed the ball from an opposition maul.

When Anscombe's attempted cross-field kick was picked off by Henry Slade it took a desperate tackle from Adams to prevent a second try.

Wales were running against a white wall of defenders, Curry and Sinckler relentless, yet Anscombe almost profited when Jones' men lost a scrum against the head and his chip ahead left Youngs scrambling desperately under his own posts.

But it was England who ended the half in control, Jonny May kicking long down the left wing and bundling the covering Hadleigh Parkes into touch.

Jones' men set up a 12-man driving maul that rumbled to the Welsh five-metre line, but Farrell opted to cross-kick to Jack Nowell in the right-hand corner and George North managed to snuff the danger out.

Wales had struggled in the first half of their first two games, against France and Italy, but once again they dragged themselves into a contest they had struggled to dictate.

Anscombe banged over a penalty on the angle after May had been penalised for holding on and the margin was down to four points with more than a third of the contest to come.

Sinckler had played on the edge throughout but was penalised in the Welsh half for obstructing Anscombe and then again for a high tackle on Alun Wyn Jones in front of his own posts.

As the England tight-head was hauled off for Harry Williams, Anscombe knocked over the penalty for 10-9 and the home support was alive again.

It was Anscombe's last act, Biggar thrown on with 20 minutes left, but when Curry won a penalty as Parkes held on 25m out it was his opposite number Farrell with the three points.

Back came Wales. Drive upon drive hammered at the English defence, the big ball-carriers taking it up to within a few metres, the crowd baying as the red shirts got closer.

On the 35th phase the white line cracked. Hill battered through two men on a clever angle and reached out to nudge the ball on to the try-line, and Biggar's sweet kick from the right touchline made it 16-13.

And with England pinned back Adams soared above Elliot Daly to take the ball at the second attempt and flop into the corner.

Man of the match - Liam Williams

'England got what they deserved' - what they said

Wales head coach Warren Gatland: "We created lots of problems for ourselves in the first half but we were much better in the second.

"All that pain and hard work last week in training paid dividends, in the second half tactically we were really good.

England captain Owen Farrell: "We didn't really get a foothold in the last 30 minutes of the game. We did well in the first half and we had a good go at the start of the second, but then we couldn't get back that momentum.

"We made a few errors and they did what they did well. We couldn't get out of our half and they managed to build a lot of pressure. It will feel a lot worse than it should now but we will look back on it and learn from what we need to."

Former England international Martin Johnson on BBC TV: "England got what they deserved, they lost the grip of it and Wales took hold with their first try. They imposed themselves physically, and there was only going to be one winner. There was a period of 20 minutes in the second half where England did nothing."

Former Wales international Shane Williams on Radio 5 live: "When you see someone like Dan Biggar coming on, you know exactly what to expect.

"I remember him in his first training session at the Ospreys, and he was telling seasoned professionals what to do. You saw the structure change and he was the difference." 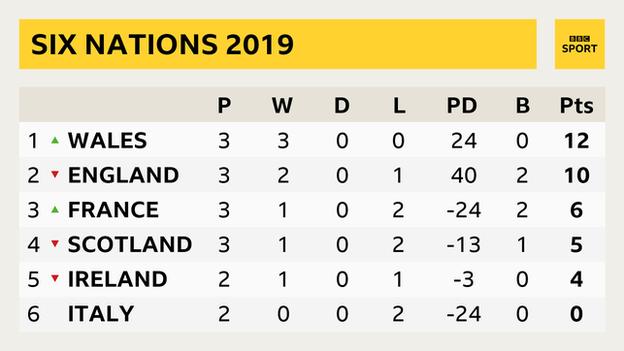