Ireland's defence of their Six Nations crown remains alive but only just after a laboured bonus-point win over Italy.

Quinn Roux, Jacob Stockdale, Keith Earls and Conor Murray scored the tries as the champions held on for victory.

Italy led at half-time with tries from Edoardo Padovani and Luca Morisi but were unable to score after the break.

Replacement Ian McKinley missed a stoppage-time penalty as Italy could not even salvage the losing bonus point their efforts deserved.

The win sends Ireland up to third place in the championship table but Joe Schmidt's side will now need a massive slice of luck to retain their title.

Italy's run of Six Nations defeats stretches to 20 but head coach Conor O'Shea will take encouragement from a superb first-half display that left Ireland rattled at the break.

Ireland fly-half Johnny Sexton stalked off the field in the dying minutes and swung a kick at a water bottle on a frustrating night for the holders.

Needing to win by a large margin to boost their title credentials, Ireland went in search of tries from the off but were ultimately undone by their own handling and line-out inaccuracies.

Italy threatened to produce a major scare as they came charging back from 3-12 behind to lead 16-12 at the break, but the tries by Earls and Murray at least insured the Grand Slam champions remain in contention with two rounds remaining.

A composed start by Ireland and some poor discipline by the home side produced an early try for the visitors as the game started along predicted lines.

Sexton kept the hosts pinned within their own half with a series of booming touch-finding kicks and the pressure eventually produced a try in the 12th minute.

The Irish attack steadily retained possession and forced their way up to the Italy posts before Roux muscled over for his first Six Nations try.

From the restart, Ireland pushed further clear when Michele Campagnaro fumbled and Stockdale pounced without hesitation and flashed over for a lightning-quick score.

Italy may have been without their captain Sergio Parisse but the returning Tito Tebaldi deputised as his side's main driving force and helped to wrestle away momentum from the visitors.

The Benetton scrum-half, who had almost scrambled over for a try before Allan's first penalty, took a quick tap-and-go that surprised the Irish defence and dashed upfield before chipping over the advancing Rob Kearney only for Jordi Murphy to rescue Ireland at the foot of his own posts.

Undaunted, Italy came again and when Ireland lost a line-out in their own half the hosts raided down the left through full-back Jayden Hayward before a delightful skip pass by Allan sent Padovani over for a superb score.

The crowd were now in full voice and they were rewarded just before half-time when Tebaldi plucked the ball from Conor Murray's grasp and powered into Irish territory.

The visitors desperately retreated to defend but Chris Farrell could not stop Morisi from barrelling over for a stunning score that sent the hosts into the dressing room with a four-point lead.

Sexton could not get his kick-off to travel 10 metres at the start of the second half as the expected Irish fight back began with a whimper.

Hooker Sean Cronin was brought off shortly afterwards when another of his line-out throws went astray as the visitors' frustration continued to build.

Another relentless multi-phase attack was finally rewarded when Earls spotted a mismatch and danced inside Dean Budd and Tebaldi to regain Ireland's lead with Murray taking over the place-kicking duties to slot the conversion.

Earls almost cut through for another score on the hour when a trademark set-piece attack sent the Munster wing through a narrow gap but he could not find the supporting Stockdale with his offload.

Instead, Murray took on the responsibility for the bonus-point try as the scrum-half cajoled his pack forwards in a powerful maul before scooping up the ball and dotting down for the try.

The champions still had 14 minutes remaining to try and chase points but instead it was Italy who came closest to scoring again only for Federico Ruzza to concede a penalty while camped on the Irish tryline.

Man of the match - Peter O'Mahony

Having won the first turnover for his team in the opening minutes the Ireland skipper came up with another important steal as Italy threatened to regain the lead during the second half. He may never be the biggest tackler or fastest in the loose but he always comes up with big plays at big moments.

'We had to get back to basics' - what they said

Ireland head coach Joe Schmidt: "The bottom line is the win and the bonus point. We will go home happy with the points haul but not the performance. Credit to Italy, they made it very tough at the ruck area and put us under pressure.

"Our performance was summed up in the last play, where Jacob Stockdale does brilliantly to get out of our half but then we are one pass from scoring and it goes to ground. We have to be more accurate than that."

Ireland skipper Peter O'Mahony: "At half-time we spoke about how we needed to make the ball stick a bit more, a little bit more accuracy. We were nearly trying too hard at times and forcing things so we just had to go back to the things that work so well for us and get back to basics a little."

Italy head coach Conor O'Shea: "We talked about trying to play with ambition and intensity which we did, but we gifted Stockdale a try. We lost players and had second rows playing in the back row. We have to create a consistency to get to where we want but hopefully people will see this is not an Italy side that is going to roll over.

Former Ireland flanker Chris Henry on BBC Radio Ulster: "We know with the quality of players Ireland have, they should have had a more convincing win. Johnny Sexton was frustrated with his performance and Italy should be proud of their performance. There is a lot to work on ahead of what is a big game now against France." 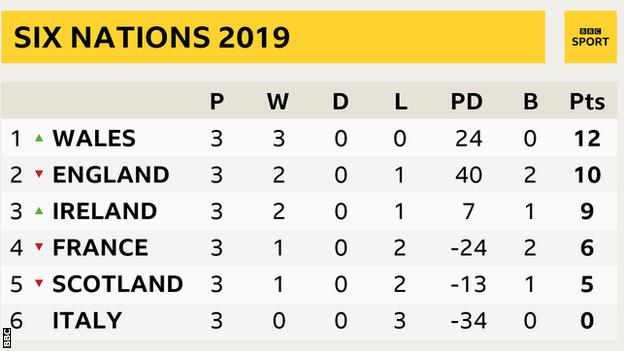