It was a typically titanic Test match as, once again, Wales and England raised their intensity to match the cauldron of atmosphere in the Principality Stadium.

Ultimately it boiled down to two halves, two game plans and one critical period in which the contest's destiny changed course.

England had a good first 40 minutes. They came in at the interval 10-3 up and their advantage should have been greater.

The final play of the first half began with hooker Jamie George throwing into a line-out, 10 metres from the Wales line.

But Wales were allowed to escape without further damage to the scoreline as Owen Farrell attempted a cross-field bomb...

However, the visitors started the second half well, before a 10-minute period in which they compounded errors and allowed the momentum of the game to shift through their own indiscipline.

It began in the 46th minute.

Wales' line-out has been creaking this year. After clocking up a world-leading success rate of 93% in 2018, it had dropped to just 65% in the first two games of this year's Six Nations.

England targeted it at the Principality Stadium with some success, kicking into positions to put pressure on Wales hooker Ken Owens. They stole three line-out balls against the head over the course of the match.

Fifteen metres from his own line and behind on the scoreboard was another difficult situation for Owens to hit his jumper. 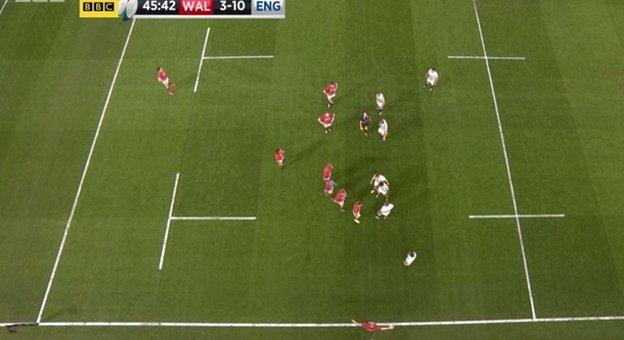 Cory Hill failed to catch the ball, but only because he was impeded in the air by England second row George Kruis slapping his arm.

It was a piece of skulduggery that Kruis might have got away with. He might have reckoned that a prime attacking platform was worth the gamble.

In isolation it was justifiable, but England's mentality seemed to slip from there.

Ninety seconds later, Liam Williams claimed a Gareth Anscombe cross-field kick before he and Nowell were bundled into touch. A bout of push and shove ensued.

At the resulting line-out they gave away a free-kick for closing the gap, preventing them from contesting another Owens line-out throw.

Two minutes later, as Jonny May fielded a Gareth Anscombe kick, he had plenty of support around him.

But Williams got over the tackled man first and neither Henry Slade or Elliot Daly had the strength or technique to shift him.

From the penalty, Anscombe kicked the goal to put Wales within range at 10-6 down.

In the 54th minute, England gave away a penalty as Kruis, along with Sinckler, came up too fast...

...which was compounded as Sinckler took out Anscombe with a big shoulder in the next phase.

Peyper decided Sinckler had done nothing wrong, but Wales loosehead Rob Evans was overheard on the referee's microphone saying "it's the same man every time".

A little over a minute later, Wales second row Cory Hill needlessly tugged on Sinckler's arm on the blind side of a breakdown.

And, finally, two phases later, Alun Wyn Jones was quick to point out Sinckler's arm snaked around his neck in contact. Peyper duly awarded the penalty from which Anscombe put Wales within a point.

In 10 minutes, England went from seven points up and 15 metres from the Wales line to being only a point clear, via three penalties, a free-kick and multiple distractions and confrontations.

The crowd were into the match, Wales sensed they were in the ascendance and suddenly the contest was getting away from England.

During our half-time analysis on BBC One, we highlighted how narrow Wales' forwards were playing in attack.

They were picking and going around the fringes or taking short pop pass off scrum-half Gareth Davies close to the breakdown.

There were times when you could have thrown a proverbial blanket over the whole red pack.

Everyone had seen how England's blitz defence had got out into the faces of Ireland's first three ball-carrying options and stifled the 2018 champions in the first week.

Many of us, including former Wales captain Sam Warburton, presumed Warren Gatland's gameplan would be to get outside England rush up in midfield - that it would be a race between Wales' ability to get the ball wide and England's ability to cut off the supply.

Instead Wales attacked inside the blitz defence, training their fire on the fringes of the breakdown and denying England the targets to hit for a big yardage gain in defence. They ground through hard yards in close quarters, where the rewards are smaller, but so are the risks of being isolated and turned over.

The clearest example was in the 34 phases leading up to Cory Hill's 68th-minute try.

Only three times in that passage of play did they go wide.

On the 21st phase, Alun Wyn Jones opted to hold on to the ball rather than risk a high-wire pass that could have released Jonathan Davies and Liam Williams.

On the 32nd, Dan Biggar threw wide to Liam Williams and the full-back looked vulnerable, with Jack Nowell making a tackle and Jamie George and Henry Slade looming...

...but he cannily released the ball, popped back up on to his feet and picked it up again, to buy his support the extra seconds they needed.

Finally, on the 33rd phase, England had been lured in so narrow and sapped of so much of their defensive line speed that throwing the long pass was the right option.

North was stopped just short, but England's defence was in tatters and Cory Hill crashed over.

It is a similar tactic to that employed by Exeter and is very difficult to stop.

The best way is to create a chance to counter-ruck by changing the focus from winning dominant collisions to instead letting the man fall over your shoulder towards your team-mates in the hope of isolating him. Either that or holding up the ball-carrier off the floor. Neither is easy.

Do England lack a plan B?

If I was England coach I would tell the players that they are not as good as people were saying after their first two Six Nations wins, but they are not as bad as their display in Cardiff either.

I don't subscribe to the idea that England needed a plan B.

I like the way they have played in wins over Ireland and France - it is clever, smart, low-risk and builds pressure on the opposition. But it has to be accurate.

On Saturday, it was just poorly executed.

For the first time in the Six Nations this year, after facing Ireland's Robbie Henshaw and France's Yoann Huget at 15, they were up against a specialist full-back in Liam Williams.

He was winning all the high balls so they needed to put the ball along the ground into the corner and pen him in or work through more phases to move him out of position.

The best thing you can say about Owen Farrell's performance is that it is one he can feed off, determined not to play like that again.

He was slow in mind and body and that is so unlike him. He got charged down, a few kicks came off the side of his boot and his execution was poor.

And he held his hand up afterwards saying he was partly culpable.

Hindsight is always 20:20 but coach Eddie Jones had an off day as well. England were crying out for a change at half-back. Introducing George Ford and Dan Robson would have given them a chance to reset.

Be the Biggar man

Wales' decision to change their fly-half on 61 minutes did pay off.

Dan Biggar arrived with England leading 10-9, but his role in those famous Wales wins over their rivals in the 2013 Six Nations and 2015 Rugby World Cup seemed to raise the crowd's expectations.

He is clever, quality rugby player, he just doesn't have poor games.

As well as setting up Cory Hill's try with his wide ball to George North, he cleared his lines effectively after a charge-down by Mark Wilson, landed a clutch place kick, put the England defence under aerial pressure and finally delivered a pin-point bomb for Josh Adams' decisive score.

It was in stark contrast to Farrell's over-cooked and mis-judged attempt at similar at the end of the first half.