Japan reaching the World Cup quarter-finals for the first time is a major step forward for world rugby and we have to cherish this history-making moment.

The Brave Blossoms' 28-21 victory over Scotland in Yokohama on Sunday was such an epic game.

They play with such intensity and their ability to handle the ball at such pace takes an incredible amount of accuracy.

In that first half, there would have been few sides able to stop Japan scoring a couple of tries.

I am so pleased for everybody involved that the hosts have qualified from their pool. Not just the team and the squad, but everyone in the country.

I'm pleased for World Rugby. The governing body made exactly the right decision to wait until Typhoon Hagibis had passed to confirm the game was on.

I wouldn't be surprised if there was a little bit of raw emotion coming out in the players during the win over Scotland, and perhaps individually they were hurt by a lot of the media coverage this week.

The focus all of a sudden was whether the tournament would be remembered for the games that were cancelled.

I found it insane that people were trying to belittle the enormity of what was going on. The reality is people have unfortunately died and been injured in a natural disaster and that takes precedence over any kind of sport or game.

It's a game of rugby, get over yourselves and focus on what's important.

Canada's game against Namibia was called off on Sunday morning because of safety concerns, but the players weren't whinging and moaning.

They did something about it and helped with the recovery efforts in Kamaishi.

Sometimes in sport, because of the commerciality and the enormity of it all, we slightly get ahead of ourselves.

Japan deserve it both on and off the pitch to be in the knockout stages.

It would have taken a monumental amount of effort from the players to convince themselves Sunday's game was going to be on when they were sat in the middle of a super typhoon.

The passion and emotion at the game was heightened because the press are asking them constant questions, their friends at home are asking 'have you heard, is it on, is it off?'.

You're going to be told in all the team meetings, 'right, let's focus like the game is going to be on. If it changes fine, but we are preparing this week for the game to be on'.

Off the pitch, it should be a huge inspiration for millions of people watching the way Japan as a country have held themselves.

They have the infrastructure and ability to fix things very quickly after a typhoon. You can only imagine the whole of Yokohama and Tokyo pulling together and saying 'we are going to do whatever it takes to make sure when the world is watching, we are going to deliver'.

Japan will give South Africa a run for their money in the quarter-finals because they play a unique style. Not even the All Blacks play at some of the speed they do.

The way they transition from short-side to wide is phenomenal. They get the ball out wide really quickly from lots of different situations and run on to the ball at pace.

It's very difficult to stop when you have Kenki Fukuoka and Kotaro Matsushima on the wing. They're just electric, not only in the way they finish their tries but with their support lines and the footwork in the forwards, the likes of Isileli Nakajima coming on and picking up the intensity up front.

The players are oozing confidence. Scrum-half Yutaka Nagare ran the show against Scotland. He knew where his team were supposed to play and where the opposition were weak.

Japan are creating their own unique style of rugby that is very difficult to play against, but it takes a monumental amount of fitness and that is probably why they looked a little bit tired in that last 15-20 minutes on Sunday.

They're going to have to rest up and get themselves rehabbed and ready for the weekend.

Expect an upset in the quarter-finals

Japan getting in the quarter-final mix is the story of the tournament so far, but historically at this stage there is an upset.

We remember when Japan shocked South Africa in the pool stage in 2015, but the Springboks were pretty poor and Japan capitalised on an average performance from their opposition.

I don't think South Africa will lose this time because for Japan it is back-to-back massive Test matches after that game against Scotland.

Well-rested and on good form, South Africa will probably be a little bit too strong. 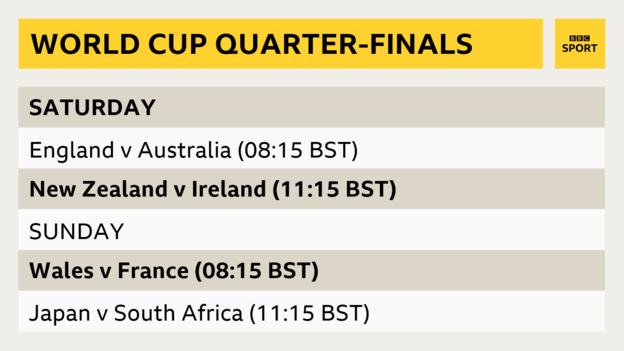 I can't see New Zealand losing against Ireland but it is hard to call Wales versus France and England against Australia.

The Wallabies are yet to perform at this tournament but have plenty in their locker and England, after not playing for two weeks because their pool decider against France was cancelled, could be caught a little bit cold.

If you haven't been involved for two weeks it's quite tricky. England have got a real tough ask to get up to match pace straight away.

You do lots of stuff in training but you haven't necessarily gone through that whole mental preparation as well as the physical preparation.

It's knockout rugby so everything is at stake.

What decisions are going to be made? What will the atmosphere be like? Who is going to feel like they're playing at home? What are the match conditions and the pitch going to be like?

There are so many mitigating circumstances as to whether you win or lose.

It won't just be as simple as saying it will be Wales v South Africa and England v New Zealand in the semi-finals - I think there will be an upset before then.

We have to take World Cup to tier-two nations

There are no 'ifs' or 'buts' here, we have to take the World Cup to other countries.

Japan have got more of an infrastructure and ability to hold a world tournament than somewhere like New Zealand.

Why are we not thinking about taking it to Argentina or Canada? Or the USA? Give it to these places. Now we've had a go at Asia, why don't we try somewhere else in Europe? Maybe take it to Germany.

Let's absolutely knock it out of the park by making some big decisions that are long-term decisions for the game, like World Rugby did 10 years ago when they gave it to Japan.

This should be just the start, the stepping stone to seriously ramping it up.