England, bidding to reach a first final since 2007, face a side who have won their last 18 World Cup matches.

And they have played New Zealand three times at World Cups but have never won.

"To beat New Zealand you can't sit and be a spectator at the show. You have to be on the stage, making the script," he told BBC Sport.

England's only previous meeting with New Zealand during Jones' time in charge was a 16-15 defeat in the Twickenham rain in November.

England were 15-0 up until Damian McKenzie's try just before half-time began the All Blacks' assault on their lead.

During the Six Nations earlier this year there were more squandered leads with England failing to win from seven points up after 50 minutes against Wales and drawing with Scotland having led 31-0.

Jones admitted that psychologically his team "have some hand grenades in the back" after the latter result and brought in psychologist Corinne Reid to work with the team.

Reid oversaw squad "honesty sessions", in which England players were encouraged to feed back on how their team-mates acted on and off the field.

Jones believes his team has unified in the wake of those results, Reid's work and the experience of going out at the pool stage of the last World Cup four years ago.

"Saturday will definitely come down to the mind. The team have worked a lot harder off the pitch to form a tighter unit which helps them get through situations on the field," he added.

"I definitely know there is more togetherness.

"Sport is one of those things that sometimes you can't teach; you have to learn from experience.

"I'm pleased for this group of players that had to endure 2015, which was a tough time for them. They have been exceptional in the way that they have attacked this World Cup.

"And Saturday is a great opportunity for us to attack the New Zealanders."

New Zealand, who have won 33 of their 41 matches against England and are aiming for an unprecedented third successive World Cup, are well used to the pressure according to assistant coach Ian Foster.

"It has always been one of the great challenges of sport how you keep growing the group that is performing well," he said. "I guess that's part of the All Blacks story and we feel pressure to keep writing that.

"We know the expectations and pressure upon us every time we play. It's a matter of getting used to that. We don't always get it right."

England have recalled George Ford at fly-half and shifted Owen Farrell to centre, with Henry Slade dropping to the bench.

The pack is the same as the side that beat Australia in the quarter-finals, with the only other change being on the bench where Mark Wilson replaces Lewis Ludlam as back-row cover.

World champions New Zealand have sprung a surprise by dropping flanker Sam Cane to the bench and picking Scott Barrett, normally a lock, at number six.

"Eddie Jones was brought in by the Rugby Football Union for weekends such as this.

"The players are relaxed. There is an inner-confidence about this England team. I genuinely do think there is total self-belief and that is coming from the top, from Jones.

"There are English rugby legends in waiting but they have got to do what the 2003 lot did. On the flip side you've got New Zealand, a captain in Kieran Read who has been there and done it but has not won a World Cup as skipper.

"Both these teams have serious hunger to take themselves into the history books for their respective countries. It feels like a real game for the ages." 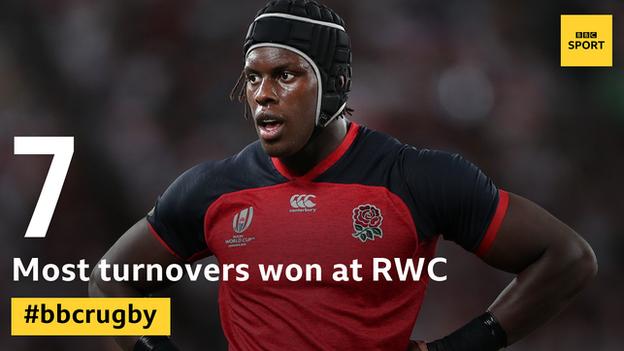 Who makes the cut from Saturday's World Cup semi-finalists?