Coach Warren Gatland lamented his dream of starting and finishing his Wales career against England being dashed after their agonising World Cup semi-final defeat by South Africa.

Gatland began his Wales reign with a win over England, but will not take on Eddie Jones' side in Saturday's final in Yokohama.

Instead Wales will face the All Blacks in the bronze medal match on Friday in Tokyo.

"The dream was that as my first game in charge of Wales was against England for the last to be against them as well."

Handre Pollard's late penalty sealed victory for the Springboks after Josh Adams' try had brought Wales level at 16-16 going into the final minutes.

"It was a very tough encounter, and well done to South Africa," said Gatland.

"We punched massively above our weight in terms of playing numbers in Wales, we gave 100% in a close contest.

"But South Africa deserved to win."

'Enjoy the week to come'

"We are disappointed, but I am incredibly proud of what we have achieved in this World Cup," he said.

"We can hold our heads held high and leave Japan with a lot of respect.

"This is a great group of players that I have been involved with and we have to enjoy this week.

"We are very disappointed about tonight and not being in the final.

"But [forwards coach] Robin McBryde said in the changing room afterwards we have to enjoy the five months we have had together and the hard work we have done and what this group of players and coaches have achieved.

"Next Friday will be the last time we are together and we have to make sure we enjoy this week."

Wing George North limped off with a suspected hamstring injury and prop Tomas Francis suffered an arm injury in another bruising contest against South Africa.

It added to a growing Wales injury list with back-rower Josh Navidi (hamstring) and full-back Liam Williams (ankle) having already been ruled out of the semi-final.

Centre Jonathan Davies only returned against South Africa after missing the quarter-final win against France.

Gareth Anscombe, Taulupe Faletau and Ellis Jenkins were ruled out before the tournament started while Cory Hill left Japan early without playing a game.

Gatland refused to use that as an excuse.

"There's no doubt we've had a couple of injuries along the way and we've picked up a couple tonight, but there's no excuse about that," said Gatland

"It's part of the game and sport. It's a squad of 31 and you don't like to see any player get injured, but you've got to have trust in the 31 that you've selected that they can do a job for you." 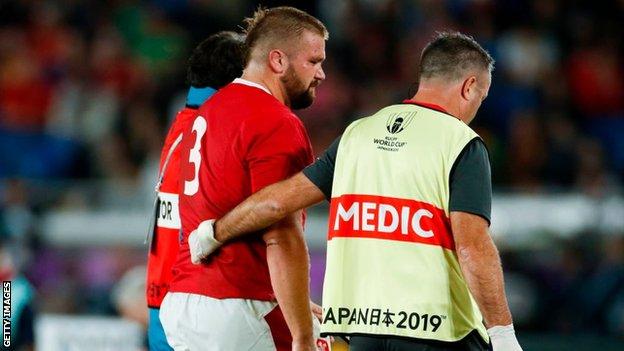 Gatland says he will decide whether to fly anyone over for Wales for the final match.

"We'll look closely over the next couple of days in how the players pull up and see whether we need to make a few changes and give some players a rest because it's only a five-day turnaround.

"Tomas Francis' shoulder doesn't look brilliant. We'll look at the squad and the depth we've got in the squad and who we might need out here.

"It's a long way to come to hold bags in a training session for a couple of days so we will have those discussions."

All Blacks 'hurting too'

Gatland's last game will be against his native New Zealand as Wales aim to emulate their third place finish of 1987 and in the process defeat the All Blacks for the first time since 1953.

He has targeted that achievement and also looked at gaining revenge against Springboks when he leads the British and Irish Lions to South Africa in 2021.

"For me, my last game in charge against the All Blacks will be hugely monumental," said Gatland.

"As a coach, apart from being with the Lions, it's the team I haven't beaten with Wales. It would be nice to be able to achieve that.

"It's a pretty big challenge and the All Blacks are hurting as much as we are.

"It's a tough game to play but you have to give it the respect it deserves and do the best you can to try to win it.

"Then I've got some excitement ahead about the challenges going back to New Zealand with the Chiefs.

"Then back to the Lions in 12 months or so and try to have some revenge on tonight's game against South Africa.

"Maybe in a couple of years against the Lions we'll be able to do that."