"I'm doing it to prove my mates wrong." "It's a belated birthday present to myself." "We got all excited".

Demand for flights to Tokyo has shot up since England's Rugby World Cup semi-final victory against New Zealand - a win that means Saturday could see England become world champions for the first time since 2003.

For rugby fans, it is an event not to be missed.

A golden ticket to the final in Yokohama, about 20 miles south of Tokyo, does not come cheap. All seats sold out months ago and the cheapest to be found via an online ticketing agency on Monday afternoon cost £1,386. Some cost almost 10 times that.

Getting to Japan might not be easy either - flight comparison website Skyscanner said searches for trips from the UK to Tokyo have increased by 3,534% since England's semi-final success. British Airways are considering putting on extra flights for England supporters.

Who, then, are the fans dropping everything in the hope of getting to watch an England victory against South Africa? BBC Sport has spoken to three of them.

Two days of travelling for 25 hours in Japan

Rob McEwen and his friends watched the semi-final with their sons at a pub in Surbiton, Surrey and, when the idea of a trip to Japan for the final was floated, the 41-year-old took it as a joke.

But it soon became clear his friends were serious and McEwen ran up the road to discuss it with his wife. 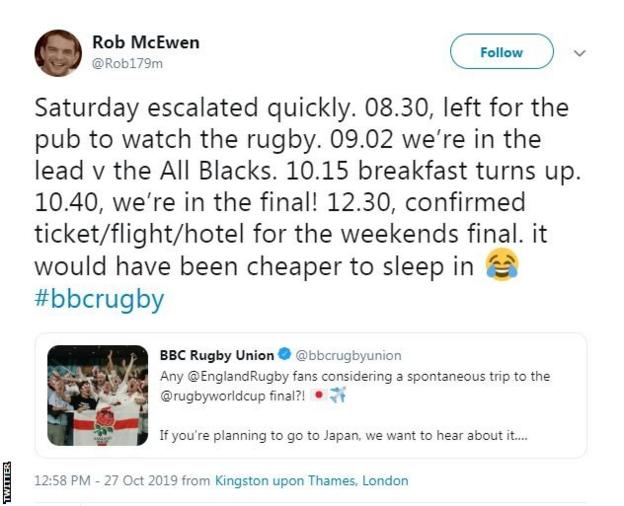 "Next thing I knew my friend Pete had sent a message that we were booked," McEwen said.

"It came to about £2,500 each with flights, tickets to the final and a hotel.

"It was all done and it wasn't even two hours since the final whistle in the New Zealand game.

"We got all excited and couldn't believe England had played so well."

To avoid having to take too much time off work, McEwen and his friends are spending more of their time travelling than actually in Japan.

They arrive in Tokyo from London five hours before kick-off on Saturday after a 16-hour journey via Shanghai and set off back the other way at 13:50 local time on Sunday.

"We were excited when we booked it, but a few hours later we were a little stressed," McEwen admitted.

Rob Lewis' World Cup final fate lay in the hands of a stranger. After deciding to travel to Japan to 'prove his mates wrong after their taunts that he wouldn't do it', the 36-year-old took to Twitter in search of tickets.

"I got an offer from someone who I believed is a legit seller and handed over £1,000 for two tickets," said Lewis, who is from Sunbury on Thames.

He had already spent £650 on flights to Tokyo via Paris, but had to wait until the day of his flight to find out whether he could get tickets.

"The courier had to deliver them before 10am and there were no guarantees until they were in my hand," Lewis added.

"My faith in humanity was on the line."

Unfortunately for Rob, it did not quite go to plan.

Steve Buckingham's usual "rugby buddy" is his daughter Matilda but, she did not have any holiday entitlement remaining from work and so he will be heading to Japan alone.

Buckingham turned 53 earlier this month. After England's performance in the semi-final, he decided a trip to the final would be the perfect belated birthday present for himself.

He spent the whole of Saturday trying to source a ticket, finally found one on Sunday and then turned his attention to flights.

Buckingham sets off on Wednesday night and will arrive in Tokyo 24 hours later via a stop in Singapore.

The day after the final, he has to travel 313 miles south to Osaka for his flight back to London, but he is certain the journey will be worth it.

"Having been to the 2015 World Cup matches and suffered the disappointment of England not getting out of the group stages, this was just a had-to-attend event," said Buckingham, who lives in Essex.

"The only shame is my daughter won't be with me."