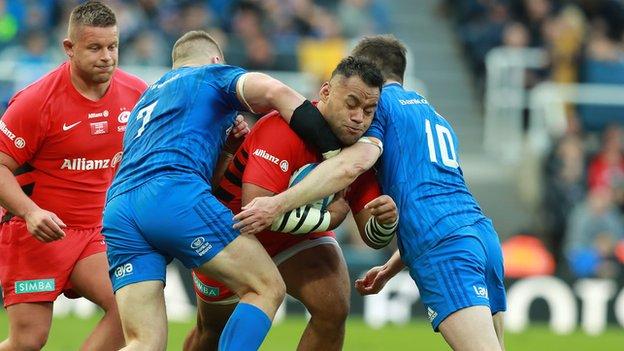 Ospreys chairman Rob Davies believes a British and Irish league will be launched in 2022-23 after investments from private equity company CVC.

Davies also predicted a more stable financial future for Ospreys and their Welsh rivals after a turbulent period.

CVC has invested in the English Premiership and Davies expects their in-principle £120m for the Pro14 to lead to British and Irish competition.

He added: "That will enable a different outlook, planning towards a season in a better, more structured way so that then you can fit in your league and Six Nations in a more orderly fashion instead of having this disjointed way that it currently is.

"That is the opportunity and that's what makes it exciting. It [a British and Irish league] will be in 2022.

"It is as certain as once you get these hedge funds involved and there's lots of money on the table. Something is going to happen.

"It will be nothing to do with me, but I'll vote for it."

Last season was bedevilled by rows over a proposed merger of Ospreys with Blues, then Scarlets, which ended in bitterness and rancour.

But after saying last season the Ospreys had their funding cut by £900,000, Davies believes the future looks brighter for all Wales' professional teams, especially with the expected boost of £35m into the Welsh game from the CVC deal.

"With the help of the PRB and others we are making very good progress into achieving our ambition to be a highly competitive region when the British & Irish League commences," said Davies.

"All the TV deals are due to expire in two years time: 2022 season.

"What will happen is that the CVC who already have an interest in the English league are attempting to secure the rights to the Six Nations. That discussion is well advanced.

"As you might imagine when you are dealing with the English, French, Irish and Scots, and then add in the Italians and the French, it's not going to be easy to get consensus.

"But those negotiations are proceeding quite well. The timescale for that is probably the middle to the end of the autumn internationals next year."

Davies joined the PRB at a volatile moment in Welsh regional rugby's history in March, 2019.

He suggested a spirit of co-operation has since prevailed, saying: "I've been involved for seven months now and last week was probably one of the biggest steps forward that board has taken, in that we agreed the new distribution model, which guarantees funding for a period of years.

"Since the game went professional in 1995 it's probably the most exciting development I can remember. It is fundamental to the future of the game in Wales.

"It is an agreement that gives all of us a fair chance to build a business model."

Davies was speaking as Ospreys confirmed Allen Clarke has left his role of head coach and says coach development should improve in Wales as a result of the PRB funding model.

"It is a pre-requisite now that as part of our business model we have a certain amount of funding for coaching.

"There's a perception, rightly or wrongly - probably rightly - that coaching in Wales has been under-funded. We don't develop, particularly well, our own coaches. We've never historically had that many coming through.

"But there is a larger sum of money available for all regions to invest in the development of coaches, but in particular the quality of the coaching set-up.

"And those funds became available only last week, so as part of this review we will be looking to implement the funds available to us in the best possible manner and I suspect we'll be having a process starting very quickly."