England won back the Calcutta Cup and kept their Six Nations title hopes alive with a turgid victory over Scotland in awful weather conditions.

Ellis Genge barrelled home for the only try with 10 minutes remaining as driving rain and strong gusts made for a disrupted, error-ridden contest at Murrayfield.

Captain Owen Farrell struck a penalty in either half, missing three more attempts from the tee as the weather contributed to a low-scoring affair.

'Rugby from another dimension'

This was a much-needed victory for England after a bruising loss in Paris. Eddie Jones' men just about deserved it, but the contest was wretched, a million miles from the epic 38-38 draw of last season.

A losing bonus point will come as small comfort to Townsend. The Scots found it ferociously difficult to live with Sam Underhill and Tom Curry at the breakdown and impossible to catch their own ball in the line-out. The key moment was a dreadful mistake by Stuart Hogg, for the second week running.

Storm Ciara was due to blow into town in time for the kick-off and, sure enough, an hour or so before it all began, she fetched up with her rain and her gales bringing any notion of an attacking spectacle to its knees.

It was brutal out there. Scotland lost five line-outs, and precious momentum, in the opening 40 minutes - some down to crass errors, most of them due to the foul conditions. England, who couldn't have been playing more conservatively had they all taken the field with Tory party rosettes on their jerseys, lost two.

Playing against the wind, they kicked ball after ball, forcing errors from Scotland and taking the lead when the home side were done on the floor. Farrell missed his first penalty earlier, banged over his second and missed his third.

This was rugby from another dimension. Had a woolly mammoth, extinct for an age, wandered across the pitch you wouldn't have missed a beat. Had a try been scored it would have been a moment of genuine shock and awe.

Scotland wasted great field position last week in Dublin and they let a few opportunities slip here as well. England were dominant at the breakdown, but error-strewn in so many departments. Everything was understandably, but maddeningly, stop-start. 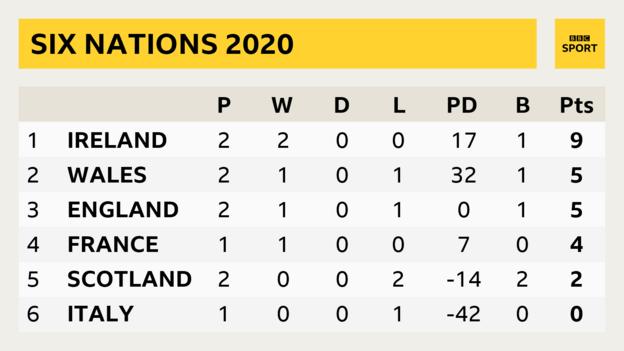 The hosts had a bit more about them in the second half, beginning with a thunder that was sparked by big Rory Sutherland, the renaissance prop who came steaming back into Test rugby in Dublin. Sutherland's big bust of the English defence was the catalyst for Scotland drawing level.

England survived a battering, their defence holding out against Scotland surges. That home pressure didn't bring them a try - on a day when a try was always going to be good enough to get the win - but they left with three points from Hastings after Underhill was penalised for not releasing.

They came again when George Ford and Jonny May fluffed their lines in defence and more heat was piled on through hard carries from Sutherland and Zander Fagerson and their hard-running chums. England held out, perhaps a little luckily. Kyle Sinckler lifted the siege with a rip from Jonny Gray but did it while he was on the floor.

The blunder count rose high, towering over the top of the stadium. Scotland lost a seventh, and later an eighth line-out, and Farrell missed a third shot at goal. Onwards we went, ever deeper into mistake-land.

The absolute howitzer mess-up came from Hogg, a week after his spectacular spill over the Irish tryline. This was the game. The Scotland captain retreated to deal with a ball under his posts, but made a desperate hash of it. Initially, it looked like he'd spilled it to Farrell, who immediately touched down.

The TMO advised that Hogg had carried it over his line but had, indeed, grounded the ball. So, scrum England. And try England. They went through a couple of phases, got it to Genge and then launched Maro Itoje, Curry and Ben Earl in behind him to power over. Farrell converted for a 10-3 lead. Scotland were distraught.

Farrell then put over another penalty to stretch the gap to 10, Hastings rescuing a losing bonus soon after. Seventy-eight minutes had been played at that stage. Frankly, it felt like 78 hours.