There is an arc in the competitive relationship between most fathers and sons.

Andy and Owen Farrell are not most fathers and sons. Which is why, when they come up against each other at the elite level once again this weekend, the dynamic between them will be so perplexing to the majority of those watching.

England v Ireland is always a huge game. With Ireland two games unbeaten and England on the rebound from World Cup final disappointment there is extra weight on this one, but you can find subplots anywhere you care: Farrell senior returning to Twickenham as head coach for the first time; Eddie Jones with a new-look coaching staff containing only a solitary Englishman; both looking to move their teams on as a new World Cup cycle begins.

But it is the Farrell against Farrell narrative that will draw the eye, because each is so integral to everything their side is, and because their characters are reflected in the style and attitude of the teams around them. 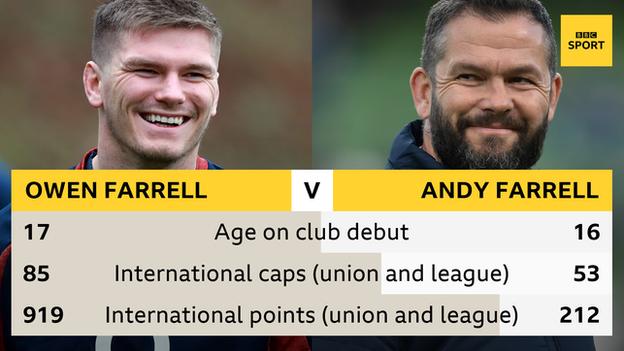 When Andy was defence coach with England under Jones' predecessor Stuart Lancaster, players would refer to Big Faz and Little Faz. You had to find that point of difference between them. Everything else was so similar.

"You would hear one of them talk and you would not know which one it was," former England scrum-half Danny Care told BBC Radio 5 Live's Rugby Union Weekly.

"The way they talk to a group, how they manage to make you want to go and play a Test match on a Monday or Tuesday morning in a meeting room. They manage to inspire you, and they do it with a massive amount of emotion.

"The main thing is the stuff that takes no talent, that takes hard work - like defending, and kick-chase. It shows your commitment to a team and attitude.

"Owen makes any team better, because you have to get up to his level. He has such high standards that he sets. If you don't throw Owen the right ball on the training field, he will tell you.

"It's the same with Andy. If you're not reaching them, you're going to be told. On Sunday you are going to see two very similar defences and game plans."

You don't instinctively think of the Farrells as emotional. The stereotype is of hard northern men playing rugby league and union in an unrelenting, uncompromising fashion.

Andy made his professional debut for Wigan at 16. Owen made his for Saracens 11 days after his 17th birthday. Both have captained England at World Cups.

But the emotion is there, all right. It's just not on display for the media, or the public, most of the time. It's kept for the training ground and the dressing room, and it's used to drag the best out of the mean around them.

You think about Andy's famous "hurt arena" speech to the British and Irish Lions squad before the third and deciding Test against the Wallabies in 2013. Staring round the room, measured but hypnotic, looking at the finest players from four nations and holding the total respect of every one.

Then you think about Owen before England played the All Blacks in their World Cup semi-final four months ago. Bringing the players around him in the final training session, firing out sentences like stiff right jabs.

"We're going to punish them with good decisions. Right?

"We're going to play this game at our pace.

"Our pace. Not how they want to play it. Right?"

You don't instinctively think of Farrells as talkative. Northern boys, say the stereotypes, keep it stripped back.

Then watch Owen on Sunday and the running commentary he provides for his team at rucks, or his father as Ireland warm up on the green grass of south-west London. These are not wasted words. They are exhortations, threats, specific instructions.

Everyone listens, nine caps in or 90. No-one argues with a Farrell, because a Farrell is almost always right.

"Owen is a defensive coach on the pitch," says Care. "He is like that all week in training and he will be like that for 80 minutes on the park.

There is only 16 years between the Farrells. They have played together on the same side. Those around them describe how they sometimes come across as much mates as dad and lad, desperate to get one over each other, seeing the battle as part of the fun, part of a game they both understand.

But there is something else too. Talk to England and Ireland players about the pair and the same words keep coming up. Commitment. Leadership. Standards. Professional.

It's the last of these that explains how the two deal with a situation that most parents and children would find impossible.

Rugby is the job, the all-consuming passion. The point of it is to win. It doesn't mean you dispense with the deep personal bonds that will tie you forever.

It means you can separate the two. You can be concurrently opposition captain and coach and father and son. You both understand the lines.

By trying to beat you I am not denigrating who you are. By using everything I know about you to defeat you I am not exploiting the trust between us. We are just being honest. We know exactly where we stand.

They have been here before. In opposition for England and Ireland they have two wins apiece. But that was when Andy was Joe Schmidt's assistant. Never before has head coach come up against captain.

It's undeniably tough on those around them: mother and wife Colleen, Owen's sisters Elleshia and Grace, his little brother Gabriel.

For the two men at the centre of it all, it makes sense. And it explains why, when England hooker Luke Cowan-Dickie is talking about one, he could equally be talking about the other.

"He's one of those guys who is mentally full-on. He definitely keeps the boys on track. He drives standards.

"He's a competitor. His head is switched on every game. He doesn't just say things for the sake of it. He leads with his actions too."

For Owen, read Andy. Big Faz and Little Faz, nothing between them but age. Father and son, and happy rivals too.

"I know it's weird for you guys," says Andy, "but it's certainly not weird for us, because it's never been any different."