Scrum-half Leanne Riley and fly-half Katy Daley-McLean start for England as their Grand Slam defence continues against Ireland in Doncaster.

Riley, 26, was left out of the Red Roses' win against Scotland but pushes World Cup winner Mo Hunt to the bench for Sunday's game at Castle Park.

Full-back Emily Scott, player of the match at Murrayfield, is replaced by Sarah McKenna.

Loughborough Lightning's Detysha Harper could win her first cap off the bench.

Harper was a late call-up to the squad after Hannah Botterman was ruled out with a calf injury.

Amber Reed remains at 12, with Zoe Harrison - who started at centre in the first round and fly-half in the second - on the bench for England's first home game of the tournament.

Riley's reinstatement to the matchday 23 means Claudia MacDonald is left out of the side altogether.

"Our strength-in-depth and competition for places has seen us make a few changes," said head coach Simon Middleton.

"We've brought Katy [Daley-McLean] back in for this game as her ability to marshal the troops and manage the side around the field will be essential in such a high-pressure game.

"Leanne Riley returns as we rotated the squad from last week. Mo Hunt went well for us in Scotland as did Claudia MacDonald, who I thought had her best performance in an England shirt coming on as a finisher.

"We are lucky to have three such outstanding scrum-halves and it's crucial we keep them all ticking over, hence the changes for this week."

England are favourites to win the Grand Slam and face Ireland, the only other unbeaten side in the tournament so far, at a sold-out Castle Park.

England beat Scotland 53-0 in freezing conditions as Storm Ciara hit Murrayfield two weeks ago and the more recent Storm Dennis has been disruptive for Middleton's side too.

The England coach says the weather has presented "a fair few challenges", forcing the leadership group, led by captain Sarah Hunter and vice-captain Emily Scarratt, to step up.

"In truth it's been almost impossible to get through the quality of work we wanted to on the field," Middleton added.

"So our mental approach to the game and our attitude will be key. Our leadership group deserve a lot of credit for the way they've kept everyone together and impacted on both on-field and off-field sessions.

"We also know we have a group of players who can rise to any challenge and a game to suit all conditions. We have shown that over the first two rounds and we know we have the qualities to do it again on Sunday regardless of whatever either Ireland or the weather throw up." 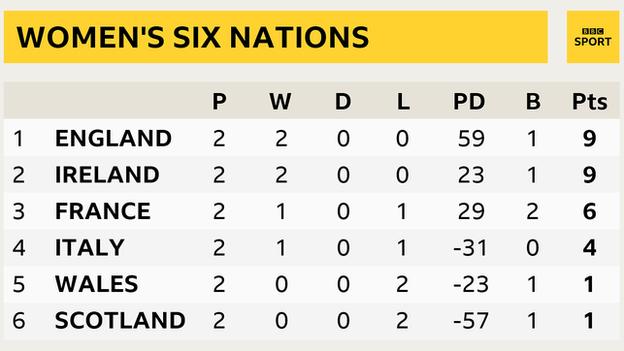