It came after defeats by Ireland and England without scoring a try, on the back of a poor World Cup campaign.

"I'd like to think we'd go into our last two games with any pressure that might have been on our shoulders lifted," Townsend told BBC Scotland.

"Maybe we didn't play as fluently, partly because of the way Italy were playing, but also maybe because we knew how important a game and result was for us to now kick on in the championship."

In a scrappy match with 17 turnovers, Scotland kept Italy scoreless, having only conceded one try against both Ireland and England.

Townsend paid credit to defence coach Steve Tandy, who replaced Matt Taylor shortly before the tournament, and believes the win can provide a platform for the final two matches of the tournament.

They host France at Murrayfield in two weeks' time before finishing against Wales in Cardiff.

"The performance wasn't perfect by any means, but the defence was almost perfect when you have a zero against you," he added.

"When you take the best bits of attack from this game and the Ireland game and put that together we can be a real threat for France, and Wales the following week."

Hogg's superb individual effort opened the scoring in Rome, providing the perfect response to costly errors by the Scotland captain in the last two matches.

"It was world class," Townsend said of the try. "He almost had another with a few similar line breaks in the second half.

"He's been full of positive energy and shown good leadership through a tough time losing games and there are other distractions." 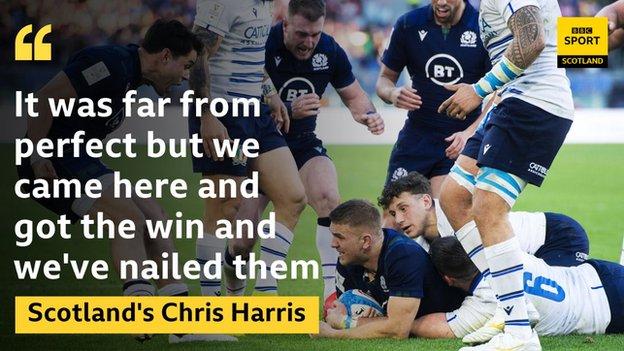