England's charge to a second successive Grand Slam continued as they inflicted Ireland's first defeat of the 2020 Women's Six Nations.

Captain Sarah Hunter opened the scoring at Doncaster's Castle Park, with Abby Dow, Jess Breach and Vicky Fleetwood all following suit in the first half.

Ireland's defence improved after the break and England full-back Sarah McKenna was the only player to score.

The bonus-point win puts England three points ahead of France.

Ireland are now third and are yet to play Italy and France, while England welcome Wales at the Twickenham Stoop before travelling to Padua to take on the Azzurre.

Ireland can take heart from only conceding one try in the second half, but there was bad injury news as centre Sene Naoupu was carried from the field on a stretcher for a head injury assessment and prop Lindsay Peat was carried off with a possible broken ankle. 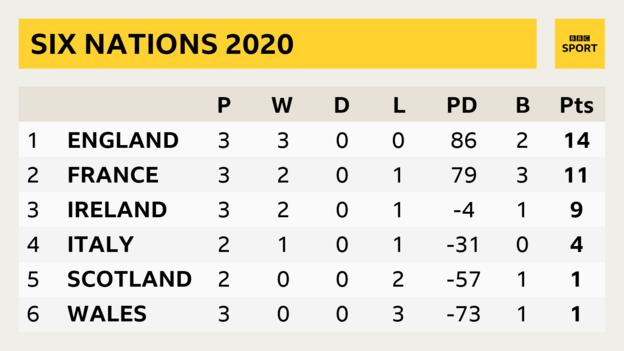 A first-half bonus point for England

After both sides felt the wrath of Storm Ciara in the second round, the sun in Doncaster was surely a huge relief and England made the most of the conditions to get off to a fast start in front of a sold-out crowd.

The Red Roses forwards completely overpowered Ireland's pack and drove over the tryline, with captain Hunter dotting down.

Ireland put some pressure on the hosts soon after, though, with a kick to touch five metres out.

The visitors kept possession for a while, but missing the talent of wing Beibhinn Parsons - who has temporarily chosen school studies over international rugby - they failed to convert the pressure into a score.

And things went from bad to worse as Ireland prop Lindsay Peat was carried from the field on a stretcher in the 13th minute, replaced by Laura Feely.

England, the only professional side in the tournament, have been firm favourites to win the title since beating France in the opening round, and they stormed into Ireland's 22 as soon as play resumed.

There were numbers on the right, and full-back McKenna sent an offload to Dow, who went over in the corner to extend her lead as the tournament's top try-scorer with four in total.

England's forwards then tried a similar move to the one that led to the first try, but Ireland knew it was coming this time.

The hosts made use of their backs instead, sending the ball left where there was plenty of room for Breach to score her 22nd try in 13 caps.

But England's pack returned to the limelight on half-time as they drove over once more, with Fleetwood getting on the scoresheet.

England defeated Ireland 51-7 in the same fixture last year, so the 22-0 half-time score was not as bad as it could have been for Adam Griggs' side.

Ireland's main focus this year will be a World Cup qualification tournament in September and facing a side that Irish centre Naoupu called "one of the best teams in the world" is perfect preparation.

After winning just one game and finishing fifth in last year's Six Nations, the side got off to a more promising start with wins against Scotland and Wales in the first two rounds.

And, although their run without a win on English soil continues, Ireland's defence impressed as they kept England scoreless in the third quarter.

But Simon Middleton's side would not be kept out forever and, after a period of pressure, McKenna eventually managed to dart through for her first try of this Six Nations.

What they said - 'I'm scratching my head about the second half'

England head coach Simon Middleton: "From a tactical point of view, it was a very disappointing second half, but it's a great win for us.

"We didn't look fluid in that second half. But at the same time we put a good first half together. We got ourselves into the game and then got ourselves out of the game.

"I'm scratching my head a little bit about the second-half performance because it's probably the worse we've been in attack for quite a long time."

Ireland head coach Adam Griggs: "We showed glimpses of what we're capable of. We struggled on the attack side and that's credit to England's defence.

"We're taking a lot of positives from our defence - it's not every day you can keep an England team under 30 points.

"There's no better team to challenge yourself against and moving into the World Cup qualifiers in September that will be huge for us.

"We've just got to be a bit sharper with our attack and take the small windows of opportunity that are there."