Zoe Aldcroft was the only girl in a team of boys when she started playing rugby aged nine at her local club in Scarborough.

After three years, she was no longer allowed to play in a mixed team and faced a tough decision: travel three hours every Sunday to the nearest club with a girls' team or give up the sport she loved.

On Saturday, the 23-year-old will be playing far from her Yorkshire home in an England shirt in front of a crowd of over 10,000.

Lock Aldcroft is part of the Red Roses team chasing a Six Nations Grand Slam as they prepare to face Wales at Twickenham Stoop.

Both she and her former club have come a long way in the last decade.

The lack of a girls' team at Scarborough RFC meant a move to West Park Leeds RUFC. Now, her local club have three and Aldcroft is a full-time professional player and regular starter for England, and plays for Gloucester-Hartpury in the Premier 15s.

"Scarborough are really excelling in women's rugby now and they really support me," she says.

"I wished so much that it would happen when I was there. Now that girls are getting the chance to play for their home team, it's really great to see." 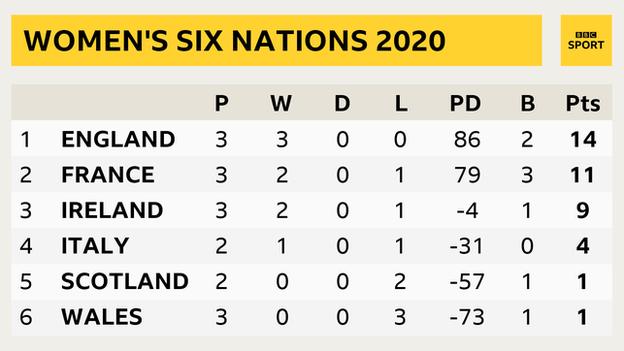 Giving up the whole of your Sunday to travel across Yorkshire and Lancashire for rugby matches is a big sacrifice for a teenager.

But such is Aldcroft's passion for her sport that she never saw it that way. Instead, she insists it was her dad - the person who had to drive her around - who gave up the most.

"I loved getting in the car on a Sunday morning. I just slept," says Aldcroft, who won her first England cap in 2016.

"My mum had made sandwiches for me. I think it was more of a sacrifice for my dad. My dad loved coming to watch so he'd do it anyway."

The debt will be more than repaid when Aldcroft's dad joins her mum and brother to watch her earn her 20th England cap at the Stoop on Saturday.

The forward missed out on England's Grand Slam victory last year because of a broken ankle, making her even more grateful to be back as the side seek to retain their title.

And she could be stepping out in front of a record crowd, with over 10,000 tickets sold and the record standing at 10,545.

Just a few years ago Aldcroft was one of many young girls unable to play local club rugby, let alone think of an England career.

On Saturday, thousands of young girls will be dreaming of just that when they watch her in action.

"I never really think of it like that but when you do, it is pretty amazing," she says.