This is a piece of pure sporting escapism, some light amid the darkness.

Forget the here and now and transport yourself into the coronavirus-free world of summer 2021 and the month of July that will bring so many extraordinary occasions, the British & Irish Lions tour to South Africa among them.

We have Sir Ian McGeechan for company on this ride to the southern hemisphere. No better man.

In the last 46 years, the Lions have toured South Africa four times and McGeechan was heavily involved in three of them. You couldn't hope for a better travel-mate.

"South Africa is the most unique of Lions tours," he says. "The crowds are intimidating, there's the Afrikaner on the highveld, there's the relentless physicality. Martin Johnson [McGeechan's captain in 1997] always said that players can only talk about being in a really physical game after they'd played the Springboks in their own backyard. It's just different there," he said.

McGeechan will pick his fantasy Lions team shortly, but first some context about what he would be looking for. The odds are that the coach Warren Gatland will be searching for precisely the same characteristics.

"You don't beat the Springboks physically, but you manage them physically so you can win somewhere else. We did that in 1974 and, in 1997, we moved their powerful forwards around the pitch and played away from them. In 2009, we didn't win the series but the South Africans said they couldn't read the rugby we were playing at times.

"Technically and tactically the game moves on, but the principle remains the same - the more decision-makers you have in the team the better. This is why I used the phrase 'Test-Match Animal' - you're looking for a player who has another level he can go to mentally and technically under pressure.

"Stopping South Africa's momentum was the key in 1974 and it's still the key to this day. Force your opponent to play a game they didn't anticipate playing, a game they didn't see in their heads. You're looking for guys who have the confidence and ability to make things happen. Pre-programmed players can't do that. You need special players."

Gatland will have to do it for real this time next year, but the rest of us can play at it for now.

"The Test team you think you will have never actually materialises," says McGeechan. "Players always come through, but for now I'd definitely have those three. Hogg has been playing great rugby and is in. I'd definitely have Watson. He's great under the high ball, has unbelievable feet and would be outstanding on hard South African grounds. Liam is the one I'd go for on the left wing.

"There are others - Jordan Larmour, Jonny May, Josh Adams, George North, Andrew Conway - and one I'd be really thinking about is Elliot Daly, a really good footballer who can play in any position in the back three but he also kicks goals from halfway. With two games at altitude it that means that 10m inside your own half is in his range so that forces South Africa to have a real discipline because they know he can hurt them."

He's been impressed by Sam Johnson and Robbie Henshaw, but Jonathan Davies is McGeechan's outside centre even though he was injured and missed the Six Nations. The Welshman has more than enough credit in the bank given that he was Lions player of the series three years ago in New Zealand and was magnificent for Wales in 2019, their latest Grand Slam year.

"He'd be my pick, if fit. If he's not, it's likely to be Henry Slade," McGeechan says. "I really rate his decision-making. I think he would excel with the Lions. At 12, I have to go with Manu. There's such power there. And you'll need that."

There's a shortlist of three here - Farrell, Dan Biggar and Finn Russell. McGeechan would take all three, but Farrell makes the Test team by dint of his control of a game, his big-match temperament and his dead-eye goalkicking.

"Johnny Sexton has been a magnificent player but he hasn't played really well for quite some time and he'll be 35 in July," he explains. "George Ford has played well for England, particularly when on the front foot, but the real test, as he discovered in the World Cup final, is how a fly-half performs on the back foot and he has something to work on.

"Farrell and Biggar can manage a game behind a struggling pack, so they'll be very important. Finn just gives you something very different. It would be fascinating to see him on a Lions tour from the start."

"I have four on my list and only three will probably go," McGeechan says. "There's Davies and Rhys Webb from Wales, Conor Murray from Ireland, and Ali Price from Scotland.

"Murray has not been himself for a while now and that's a concern. I'd really like to see Price coming through because I enjoy the way he plays. But if I had to call it, I'd say Davies. He's a terrific player."

Like the rest of us, McGeechan watched in admiration - and occasional awe - as Sutherland came back from the rugby wilderness during the Six Nations. The prop was absent from the big stage for more than three years but returned with a series of powerhouse performances. McGeechan calls him a "bolter". And he's in.

"There's a huge amount of competition," he says. "Ellis Genge and Mako Vunipola from England - although Mako seems to get injured a hell of a lot - Cian Healy from Ireland and Wyn Jones from Wales.

"On form, I have to go with Sutherland. He's been absolutely brilliant. He's not just a good technical rugby player, he can play, he can run, he makes an impact. His story is an incredible one. I'd love to see him kick on."

"Three hookers will travel, but I think George is the pick of them. Fantastic consistency, tough, good set-piece performer, just a very solid character. He will take some shifting."

This looks like it could be a three-horse race between Tadhg Furlong, an epic Lion in New Zealand in 2017; Kyle Sinckler, who has become more and more critical to everything England are doing; and Zander Fagerson, who discovered his very best stuff this season.

"I'd still have Furlong," says McGeechan. "He's not had a brilliant season but he's such a good player and in these circumstances you would get the best out of him. He'd rise to the challenge. He's done it before."

McGeechan laughs when considering the options here, because there's so many. Maro Itoje, George Kruis and Joe Launchbury of England; Iain Henderson and James Ryan of Ireland; Alun Wyn Jones of Wales; Grant Gilchrist of Scotland. That's just for starters.

"It's a wealth of talent," he says. "Itoje is definitely one of them and I'd bracket him as a possible captain. He's a hell of a competitor. When you watch him, he's into everything. He reads things so well, he's niggling, he leads by example. He's a really intelligent lad and a really intelligent rugby player.

"A lot of people would probably go for Alun Wyn alongside him, but I wouldn't. Alun Wyn would be an outstanding off-field captain, a standard-setter, a senior figure, but with another year on the clock and some of the other talent that's out there I'd go somewhere else for Maro's partner. And that would be James Ryan - another very bright guy, another very hard and driven player with a massive work ethic.

"Those two could be unbelievable. They are two natural leaders and I'd be intrigued to see how their chemistry evolves on a Lions tour."

The Six Nations blindsides were Aaron Wainwright, CJ Stander, Jamie Ritchie, Courtney Lawes and Peter O'Mahony, with some of them capable of moving around the back-row. McGeechan is also classifying Sam Underhill as six.

"Lawes is very close - he's getting better and better at six," he says. "There's also the argument about having an extra player in the lineout against SA and he's strong there. But I'd go with Ritchie. He's tough, mobile, into everything. He's a carrier, a leader, he's improving game on game and I think he could be outstanding in a Lions jersey."

There's no shortage of formidable sevens on this list. Justin Tipuric, Hamish Watson, Josh van der Flier, Dan Leavy (if he can get himself fit), and Curry. The Englishman gets the nod from McGeechan even though he's being played at number eight for his country in the absence of the injured Billy Vunipola.

"A very clever player, a relentless guy with a huge engine. He'd come into his own in a Lions environment," he says.

"If I was picking on this season's Six Nations, I'd go with CJ Stander," McGeechan says. "If everybody was 100% fit, I'd go with Vunipola.

"There are options. Taulupe Faletau is coming back into it, Nick Haining has really impressed me and Caelan Doris is one to watch very closely. He was unlucky with injury but he might well come through over the next 12 months and overtake everybody. He's an outstanding young talent.

"It's hard to look past a fit Billy, though. Ritchie, Curry and Vunipola would be a very exciting back-row but you could go Lawes, Watson, Doris or Stander, Tipuric, Faletau. You could have a dozen combinations." 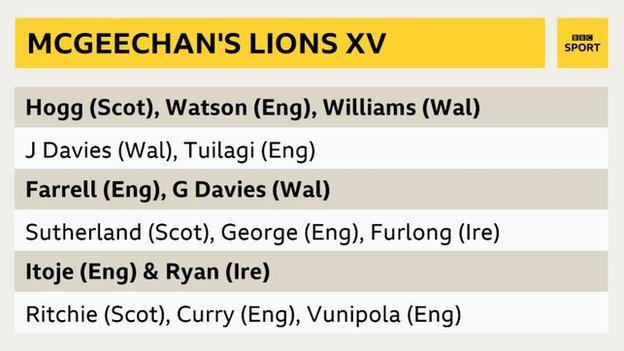 'Scots not so easy to ignore now'

Three Scottish Lions in the starting Test side? That's one more than were picked in Gatland's entire squad the last time. Gatland came in for heavy criticism from Scotland fans, many of whom painted him, ludicrously, as anti-Scottish.

"I was the same in 2009," says McGeechan. "I picked two Scots in the original squad [Euan Murray and Nathan Hines] and I would hope people wouldn't call me anti-Scottish. It was hard to pick the players because performances were so indifferent, collectively and individually. It has to be the best of the best.

"Scotland were in the doldrums, but there are clear signs of improvement now. Gats will have an open mind. He'll see Scottish players have an ability to play without the ball. Their defence has been excellent.

One of the biggest criticisms of picking a Scottish player last time was that they were fine with the ball but hopeless without it and that puts a question mark against you. It's about attitude and the Scottish boys are showing the right attitude now. They won't be so easy to ignore next summer."

At the outset of all those trips, he didn't once accurately forecast what the Test side was going to be. He doesn't expect this one to be accurate either, but he basks in the fun of it, now and forever.