Wales coach Wayne Pivac has named a 36-man squad which does not include Ospreys scrum-half Rhys Webb, although his team-mate Rhodri Jones is named among the props.

Wales open their Six Nations campaign against Ireland in Cardiff on 7 February.

Prop Jones last played for Wales against South Africa in June 2018 and comes in at loose-head alongside Wyn Jones and Rhys Carre, with Rob Evans and Nicky Smith both injured. Tight-head Samson Lee is also ruled out through injury.

Hooker Elliott Dee is preferred to Sam Parry, while Scarlets skipper Ken Owens returns after the British and Irish Lion missed the autumn campaign with a shoulder injury.

Ospreys second row Adam Beard is recalled while Jake Ball is named - despite being unavailable for Wales after the tournament as he leaves Scarlets to be closer to his family in Australia.

Wales captain and lock Alun Wyn Jones is winning his battle to be fit for the opening match after damaging knee ligaments against Italy in early December.

Lydiate is preferred to young Cardiff Blues back-rowers James Botham and Shane Lewis-Hughes, who were capped in the autumn.

Regional colleague Josh Navidi is named despite having not played this season because of concussion issues. He will feature for Cardiff Blues against Scarlets this weekend.

Scarlets flanker Josh Macleod is the one uncapped player in the squad. After being named in the initial autumn party, Macleod was ruled out of contention for selection because of a hamstring injury.

"We think Dan is the form six in the competition and has been throughout the season," said Pivac.

"He brings a wealth of experience and he's back playing some of his best rugby.

"We had a good look at some young players in the autumn and we know what they can do and what their work-ons are. Clear messages have been sent to those who missed out.

"James and Shane were in our discussions and both players have been spoken to.

"With Shane, that was an interesting discussion. There was a choice there between the experienced player in form (Lydiate) and the younger man.

"We feel Josh deserves an opportunity. James did well when he came in and has a big future but Josh is that bit further ahead in his physicality and we're going to need that."

Tomos Williams returns from injury instead of Webb, with Scarlets scrum-halves Gareth Davies and Kieran Hardy also included. Pivac says Webb is not as quick as the selected trio.

"Rhys and I had a good chat his morning around the accuracy of his passing game, which he needs to work on and get those numbers back up," said Pivac.

"We questioned his pace at the top end of the game. The other three all bring electric pace, we know that. That is something in question at the moment with Rhys but he's not out of the loop in playing for Wales in the future." 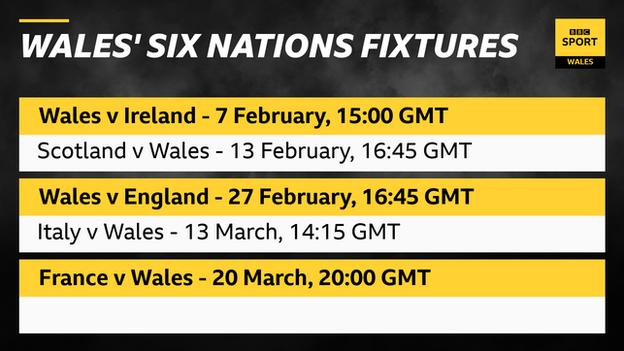 "Jarrod was left out of the autumn series and was given parts of his game to work on, mainly the kicking side," said Pivac.

"Neil Jenkins and Stephen Jones have been involved in that process and we're interested to see how that's developing.

"We know about his running game and we know he's a gutsy defender."

Amongst the backline, Liam Williams is included despite being suspended for the opening game against Ireland after being sent off playing for Scarlets against Cardiff Blues on 9 January.

"I've spoken to Liam and it was disappointing for all concerned," said Pivac.

"Liam has been out of the game for a while, he's a frustrated player and just wants to get out there.

"He made an error of judgement and he'll pay the price by missing three matches, one of which is a Test match."

Hallam Amos is recalled with Jonah Holmes dropping out through injury although there is no room for Bristol teenager Ioan Lloyd.

Wales finished fifth in the 2020 Six Nations tournament with the only victory coming against Italy.