Victory for Wales in Paris on Saturday would give them a record-extending fifth Grand Slam in the Six Nations.

Few would have predicted this after they won just three Tests in 2020 but Wayne Pivac's side have recorded four straight wins to lead the standings.

They have also equalled their record of 17 tries with a game to spare.

However, a France victory would take the fate of the championship down to their rearranged game with Scotland next Friday evening.

Wales will field a starting XV containing a total of 987 caps, with 14 of Pivac's line-up having enjoyed Grand Slam success under his predecessor Warren Gatland. The exceptions is wing Louis Rees-Zammit, who was just seven when Wales landed their first Gatland-coached Grand Slam in 2008.

Wales are led from the front by inspirational captain Alun Wyn Jones, who will make history if Wales topple Les Bleus as the first player to be part of four Six Nations Grand Slam-winning teams.

Wales have made one change to the side that thrashed Italy with second row Adam Beard replacing Cory Hill.

France name the same XV that narrowly lost to England at Twickenham.

There are three changes on the bench as head coach Fabien Galthie switches from a 6-2 to 5-3 split between forwards and backs.

Eddie Butler: Effusive praise seems to be in short supply for the Wales team. The verdict on their exploits seems to be: lucky to be in contention.

They are base stock elevated by French referees and by Irish and Scottish red cards. If Wales have a quality it is doggedness.

France are the darlings of the tournoi. At the merest mention of Antoine Dupont, we swoon to order. Rolls Royce romance against the winners of the village tombola. Even in the defensive systems, Gethin Jenkins is the junior apprentice to Shaun Edwards. 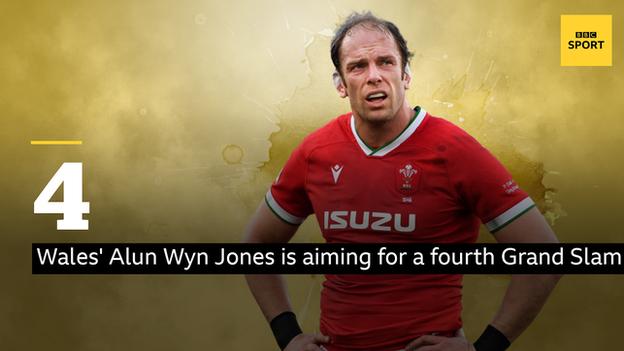 View from both camps

France head coach Fabien Galthie on picking Matthieu Jalibert ahead of Romain Ntamack: "We chose him for a simple reason, he was excellent against England.

"He was solid, he kicked perfectly and performed well in the way he managed the game against very tough opposition."

Wales head coach Wayne Pivac: "We are all looking forward to Saturday and to the finale of the Six Nations.

"We are four from four to date but know this weekend will be a great challenge against a very good French side, but we are looking forward to it.

"We know we need to step up from our previous performances and we want to end the tournament with a performance we know we are capable of."