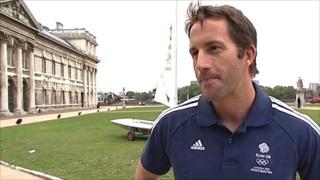 Qualifying for 2012 team was tough - Ainslie

Ben Ainslie says stiff competition from his compatriots to qualify for Great Britain's 2012 Olympics team has put him in a stronger position for the Games.

The Finn sailor is on course to challenge for a fourth consecutive Olympic gold medal, after being named in the GB sailing team.

Sailors in seven of the 10 Olympic classes were named by Team GB on Tuesday.

Full details of the GB team