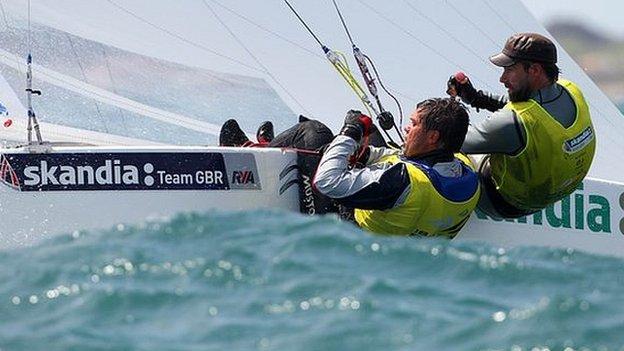 Iain Percy and Andrew Simpson geared up for next week's Star Worlds with gold at a windy Hyeres World Cup regatta.

The Olympic champions, looking to clinch a second world title in three years, led going into the final medal race and won by one minute 20 seconds.

The Beijing Olympians were the highest-placed 49er crew in France as the battle for the one British spot at London 2012 hots up.

In the only other class in which the British representatives for Weymouth have not been selected, Alison Young missed out on a podium place by one point after an intense tussle with team-mate Charlotte Dobson in the Laser Radial medal race.

But it meant Helena Lucas took silver in the Paralympic 2.4mR class, while the Skud crew of Alexandra Rickham and Niki Birrell were also second.

"It's particularly pleasing to see all three of our Paralympic classes on the podium and being in a position that we were realistically racing for gold in the Laser Radial," said Team GB Olympic sailing manager Stephen Park.

"Following the silver for Percy and Simpson in Palma, taking the gold by a comfortable margin provides confidence that they're on the right track.

"It's been a particularly frustrating week for the 49ers and women's match racers where the programme has been curtailed by the strong winds. One more race in both fleets would have given the match racing girls and Morrison and Rhodes a good chance of being on the podium in their respective classes.

"Unfortunately that's just the way it goes sometimes, and is just another justification for why we need to be competitive in all our events."