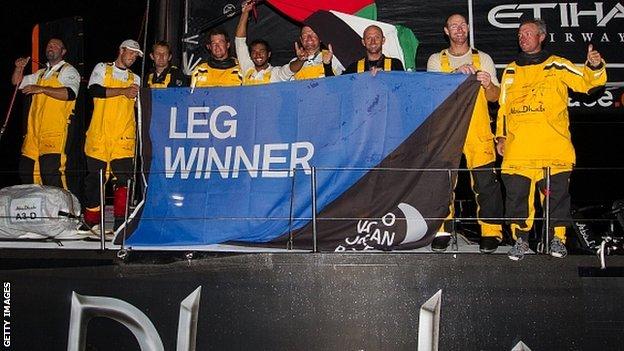 Walker's crew, whose boat suffered a broken mast on leg one, scored their first win of the around-the-world race by six minutes after the 12-day dash.

It's one of the most amazing experiences of my sailing career

The race next goes to Lorient, France and ends in Galway, Ireland in July.

"Do you think you can make the last 10 miles of a race any harder than that?'' said an emotional Walker, a double Olympic silver medallist and former British America's Cup skipper.

"It's a massive relief - it was such a tough race. Everyone knows we're not as quick as some of the other boats so we just had to make up for it in other ways.

"It's one of the most amazing experiences of my sailing career, that's for sure."

Telefonica, skippered by London Olympic hopeful Iker Martinez, lost the race lead for the first time since November after finishing fourth in Lisbon.

Camper edged the Spaniards by two minutes behind third-placed Puma.

Abu Dhabi, who lie fifth out of the six teams in the race, also retired from leg five from Auckland to Itajal in Brazil after damaging a bulkhead.

Both of the remaining legs carry 30 points for the winners and four teams could still win the 39-year-old competition.