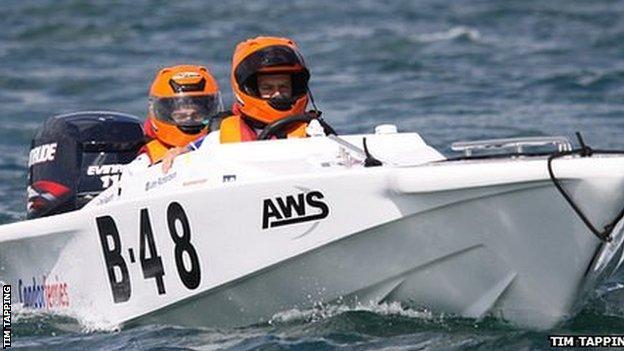 Guernsey's world champion powerboaters John Richardson and Tom Sauvarin were seventh in the opening race of their title defence in Norway.

Initially the duo finished sixth but a protest against a disqualification further up the field was upheld moving them down a place.

Last month the pair had to rebuild their boat in a week after problems.

But the duo are pleased with the result as calm conditions have favoured their rivals with catamarans.

"We didn't come last, which was what I was expecting, so that's brilliant and under the circumstances we're absolutely ecstatic," Richardson told BBC Guernsey.

"It's not what we were hoping for conditions-wise, so given that all of us here are over the moon.

"Our maximum speed is 61mph but we can run in heavy chop and waves at up to 58mph.

"But some of the catamaran are running at over 80mph so we've got a quite big speed disadvantage in the flat unfortunately."

The pair have two more races left in the championships, but with more calm weather predicted it seems unlikely that they will be able to keep hold of their title.