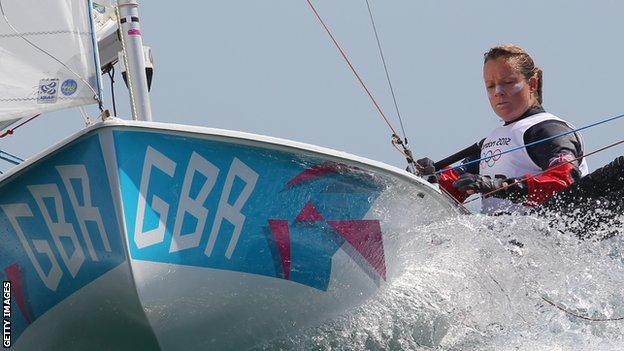 Just 18 months ago, an Olympic medal was a distant dream for sailor Hannah Mills.

By her own admission, Cardiff-born Mills was "wandering in the wilderness" without a sailing partner and no great direction.

But then a door opened when double Olympic champion Sarah Ayton retired, leaving Saskia Clark to decide on a crewmate to take the helm in the 470 class.

"We linked up and it all clicked into place," explained 24-year-old skipper Mills, a former pupil at Howell's School, Llandaff.

Favourite sports other than sailing? Tennis, rugby, F1 or football

If you were not a sailor what would you be? Rally driver

How would you describe Saskia? Fun, tall, old

The pair won silver at the Hyeres World Cup event in April 2011 in only their second regatta together and sailed to victory in an Olympic test event at their home and London 2012 venue in Weymouth and Portland.

They followed that with another silver at the 2011 Sail for Gold World Cup Regatta, before winning silver in the World Championships in Perth and gold in Barcelona in May, becoming the first women to win the class.

Her achievements had even caught the eye of American rapper Snoop Dogg, who recorded a video message to congratulate her on her Olympic selection.

Their pre-Olympic form made them gold medal favourites, a tag that seemed to rest easy on Mills despite her inexperience on the biggest stage of all.

But success has been a constant theme for Mills ever since she first ventured onto the seas off the south Wales coast while on holiday.

The love of sailing started when she was eight years old. Two years later she was already training with Wales.

International honours soon followed, becoming a two-class junior European champion. She had won every junior domestic title by she was 14, was named UK Young Sailor of the Year and won the Carwyn James Award for outstanding junior achievements at the 2002 BBC Wales Sports Personality of the Year.

An Olympic silver medal can now be added to her impressive roll of honour.

Gold had been in Mills's sights as they set off in the final medal race level on points in the lead with New Zealand.

But the Kiwis were on dominant form as they sailed to victory, with Mills and Clark unable to stay in touch.

The disappointment was obvious as they crossed the finishing line, but there was equal pride and a certain amount of astonishment that their brief journey together had taken them so close to Olympic glory.

"I'm pretty gutted really," was the immediate reaction from Mills. "But we've had an amazing 18 months together. I've had a great time."