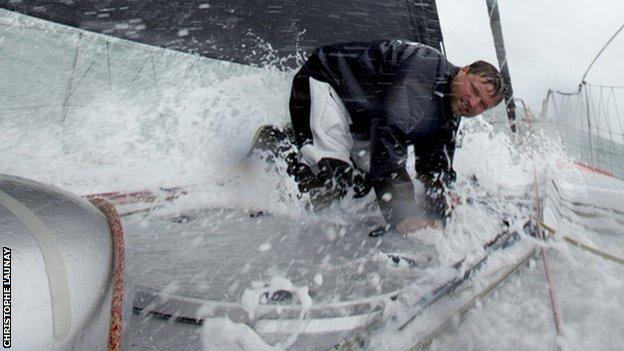 He's in the middle of the Atlantic on the final leg of one of the world's most brutal sporting events, but sailor Alex Thomas has taken time out to answer your questions from his boat.

Thomson, from Hampshire, is in fourth place in the round-the-world Vendee Globe, a 24,000-mile three-month solo race.

Thomson has a technology hub on his boat, meaning he is able to communicate via email, Skype and Twitter and has taken the time to share his experiences with BBC Sport's followers.

The Vendee Globe has so far proved Thomson's nemesis - his previous two attempts ended unhappily - but the end is in sight this time round with approximately one month to go.

The 38-year-old has already spent Christmas alone and missed his son's second birthday but his sacrifices are paying off as he has just passed the crucial landmark of Cape Horn, off southern Chile, for the first time. This means he is out of the "danger-zone" of the Southern Ocean.

There is no time to relax though as Thomson only sleeps for 20-40 minutes every two-and-a-half to four hours, carries out his own repairs and cooks his own freeze-dried food, all while negotiating 10m waves in the Atlantic Ocean.

@kopite_kev: Do you have enough distance left in the race to catch third, second or maybe even first place?

It is all on for third place. First or second need the guys ahead to be slowed by weather or problems. Doldrums and Azores High are both potential opportunities.

‏@Saherra: What did it feel like to go past Cape Horn and know you are nearing the final stretches?

Relief more than anything. I wanted to get out of the south and away from the gales so badly. This race is not over till it's over, so no back slapping yet.

@CameronRossHall: After a brilliant year for British sporting success, do you feel more pressure to win?

Having done this race twice before and not finished, the pressure for me is to finish.

Life on the boat

‏@SamJamieHarris: Do you ever get scared or are you pretty confident with everything?

There are moments when I am scared especially when in the Southern Ocean. It is easy to see a situation get out of control and become life threatening very quickly. Fortunately you don't have too much time to think about it!

‏@Laura_Kirby: What is the single thing (other than sleep) that you miss the most when at sea?

I miss my wife and little boy. He is growing up and I feel like I am missing out.

@PHA_sport: What is the first thing you'll do when you step off the boat at the finish line?

‏@VCoghlan: What food or drink do you miss the most when you are at sea?

Right now I would murder for a Big Mac.

@grahammanley:How do you deal with the solitude?

You just get on with it. I have a telephone and emails so that helps.

‏@Kirsty22: Have you ever suffered from sea-sickness?

I do feel ill sometimes but always at the start, not during. The trepidation at the start of this race always makes me feel a little queasy.

@GeorgeOGHill: Do you have time to do much fishing?

We generally go too fast. When I did the Clipper Race we caught fish every day.

@Madeira431: What three items do you always take on such journeys?

A pair of crocs, Spanish jamon and marmite.

‏@UnShavenMonkey: What is the best wildlife you have seen?

A few whales, dolphins and birds mainly. Squids and little shrimp things in the cockpit.