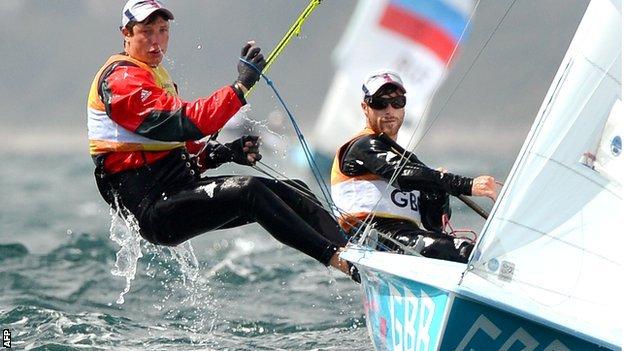 Olympic silver medallist Stuart Bithell has announced he will partner Chris Grube in a bid to win gold at Rio 2016.

Bithell partnered Luke Patience to win silver at London 2012 and two World Championships in the 470 class.

The 26-year-old has now made the switch to the high performance 49er skiff in a bid to secure a gold medal in 2016.

"It's a very exciting new challenge for us both," said Bithell. "There's lots to learn but we've been having a great time. We have so much potential."

The Rochdale sailor and Helensburgh's Patience, also 26, called time on their 470 partnership at the end of 2012, with their combined body weight in the boat deemed too heavy to be competitive in the light winds expected in Rio.

Bithell will now join forces with a fellow North West talent, 27-year-old Chris Grube from Mickle Trafford, Cheshire, who has also made the transition from the 470 into the 49er class.

The pair revealed their new partnership at the London Boat Show at the Excel Centre.

Grube sailed with double Olympic silver medallist Nick Rogers in a bid for selection for the London 2012 Games, but missed out on the one GB qualifying spot at the hands of Bithell and Patience.

Grube and Rogers claimed some impressive results in their short time together, finishing fourth at the Sail for Gold World Cup Regatta in 2011, fifth at the Olympic test event in Weymouth and Portland, and 10th at the 2011 ISAF Sailing World Championships in Perth.

The former rivals have been racking up the training hours in the 49er since October getting to grips with their new boat, and up to speed in a fast and highly agile class.

"For me it's a change of boat and a change of position on the boat from crew to helm," said Bithell.

"As a junior and youth sailor I was a helm so it's kind of a return to my roots in a way - albeit in a faster boat.

"Hopefully I can be as successful as the likes of Sarah Ayton and Ian Walker, who started their Olympic careers as medal-winning crews and then went on to become medal-winning helms as well.

"Chris is a great crew and I know that he fully shares my dreams of gold in Rio so we'll both be putting in the hard yards to try and make that happen."

Grube, who sailed in the 470 with Luke Patience until 2009, said: "The opportunity to sail with Stuart, and in such an exciting class, was one I jumped at. We've had some great training over the past few months, both in the UK and in Murcia, and with a lot of Team GB talent in the 49er we know we're going to be pushed hard, which is great motivation.

"We've got a lot of work to do, but we're both really excited about the challenge. I've had the opportunity to sail with three silver medallists now - Luke, Nick and now Stuart - so I have a lot of experience of my own of Olympic campaigning which will hopefully complement Stuart's skills and make us a dream team for Rio."