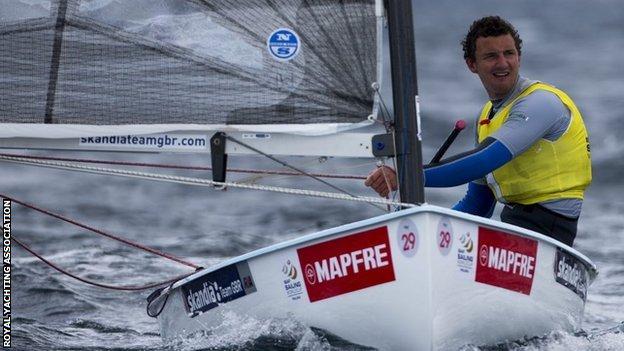 Young won a tight battle in the Laser Radial class while Scott also relied on clever strategy to win the Finn title.

There were silver medals for women's 470 pairing Sophie Weguelin and Eilidh McIntyre and windsurfer Bryony Shaw.

The Olympic class sailors had followed the standard set by Megan Pascoe who sailed to Britain's first medal on Friday with silver in the 2.4R Paralympic class, giving them a total haul of seven medals for the event.

Young held the overall lead after the first of the day's two races but had to fend off Denmark's Sarah Gunni in the second race.

Under the new scoring format being trialled at the Palma regatta, there were two double-points medal races for the majority of the Olympic classes. The British team said the rule change was "challenging".

The Dane got off to a strong start but Young reeled her in and pegged her to the back of the fleet.

"Going into the last race it was only the Danish girl who could beat me, so coming down the run I was just going to make sure she couldn't get boats between us," said Young, whose last-place finish behind Gunni was still good enough for gold.

There were similarly anxious moments for Scott in the second Finn race as Dutch sailor Pieter Jan Postma had narrowed his lead to just one point after the first race.

"It was quite stressful with the double medal race," said Scott, who is targeting a place in the Finn class at the 2016 Olympics now his rival Ben Ainslie has retired.

"We had a little bit of an engagement in the pre-start which was good fun and fortunately I came off the better. He also made it a little bit easier for me halfway round when he capsized!"

There was no such luck for windsurfer Shaw as she had her narrow lead overturned by Italy's Flavia Tartaglini in the RS:X event.

Welshman Evans and Powys sailed to their first World Cup podium finish in the 49er class, where there were capsizes aplenty.

The second medal race was eventually abandoned because of the windshift, leaving the Britons with their bronze.

Beijing gold medallist Pippa Wilson also made her comeback to the sport after retiring in 2009. But she and her new sailing partner John Gimson finished eighth overall in the new Nacra 17 class.

"The team has had a cracking week together, has had good fun, and everyone is really looking forward to the next event and excited about racing again in Hyeres [France] in two weeks' time."