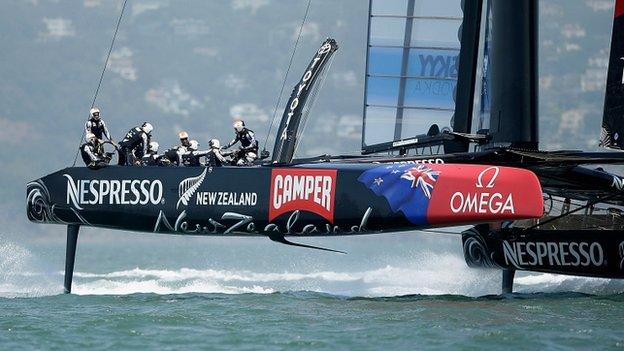 The 34th America's Cup begins in San Francisco on Sunday against a backdrop of sadness and controversy.

Britain's Andrew Simpson, 36, was killed in a training capsize in May, leading to a comprehensive review and a series of measures to improve safety.

But the challengers argue that some of the measures stack the odds in favour of holders Oracle of the US.

The winner of the event will go on to race Oracle, who include British Olympic legend Ben Ainslie, for the America's Cup, a best-of-17 series from 7-21 September.

The America's Cup has always been seen as the pinnacle of inshore yacht racing, known as much for controversy, complex rules, court-room wrangles and rich men posturing, as for cutting-edge design, world-class sailors and absorbing racing.

The traditional model was for a host of teams to contest the challenger series in head-to-head match races in sleek but slow single-hulled yachts.

But the 34th America's Cup was supposed to drag the 162-year-old event, the oldest trophy in sport, into the 21st century.

Revolutionary, high-speed 72ft multi-hulls - known as AC72s - with rigid "wing" sails and hydrofoils to lift the hulls clear of the water were devised to appeal to a new generation and make the sport more exciting to watch, both from the shore and on TV.

The Cup is often described as the "Formula 1" of sailing, but organisers want it to be more like Nascar, with similar thrills and spills.

Only three challengers emerged to take on Oracle - backed by software billionaire Larry Ellison - who as winners in 2010 got to choose the location and format for their defence.

However, Simpson's death - when he was trapped under the hull of his Artemis catamaran after a capsize in San Francisco Bay - highlighted the fine line between ultra-high performance and unproven technology. Investigators have yet to announce whether a structural problem caused the yacht to flip or whether the capsize broke the boat. 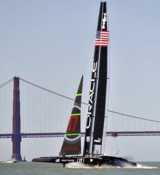 The revisions were agreed by all four teams but Team New Zealand and Italy's Luna Rossa have since protested against two, relating to the weight of yachts and the design of the rudders, saying they "are performance-related rules not necessary to ensure safety".

The two teams claim the rule changes favour the design parameters already trialled by the Americans. Team New Zealand's protest is expected to be heard in San Francisco on Monday, with no schedule yet for Luna Rossa's.

Murray denies he has exceeded his authority, saying: "I was appointed regatta director by the challengers and accepted in that role by the defender. I work on behalf of all the teams.

"I don't believe you can pick and choose. These safety recommendations are a package and together they increase safety for our sailors and they are now rules of the event."

The Sweden-based Artemis team, with Simpson's Olympic partner Iain Percy as sailing manager, will join the Louis Vuitton Cup late because of a lack of time to prepare their second AC72 after the first was destroyed in the fatal capsize.

Should Artemis miss the scheduled round robin, the format is likely to be rejigged so they join in the semi-finals against the second-placed team, still giving them a chance to make it to the America's Cup proper.