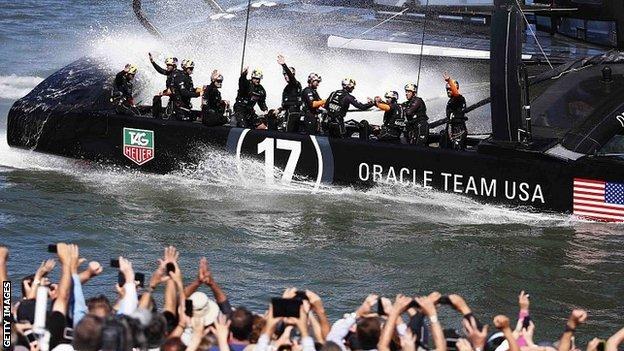 Oracle Team USA clinched their fifth straight win to close the gap to 8-6 on Team New Zealand in the America's Cup.

The defending champions beat the Kiwis by 33 seconds in Monday's only race to keep the Cup alive with New Zealand needing one win for victory.

The challengers have been within one race of victory since Wednesday, but have been hit by a series of postponed races and Oracle's resurgence.

The US boat needs three more wins to retain the trophy in San Francisco.

Team New Zealand edged the start in light winds but Oracle was first to rise onto its hydrofoils and rounded the first mark in the lead, which it never relinquished.

The light airs that delayed the start to race 16 meant Monday's second race was postponed. Two more races are scheduled for Tuesday, taking the 162-year-old competition into an unprecedented 17th day of racing.

Oracle have won eight races in all but were penalised two points before the regatta for illegal modifications to their smaller 45ft catamaran in the warm-up series.

Team New Zealand dominated the early stages of the 34th America's Cup, surging to a lead of six wins to one with a faster boat upwind and slicker crew work.

After race five, the holders made changes to their 72ft catamaran and called up Britain's four-time Olympic champion Ben Ainslie from the training crew to the position of tactician.

The Kiwis won the next two races, but with further modifications and improved crew work Oracle hit back with seven wins in the next nine races to put Team New Zealand's celebrations on hold.

A number of race postponements because of strong winds also delayed the event, while New Zealand were within two minutes of victory on Friday before organisers abandoned the race because light winds meant the 40-minute time limit had elapsed.

The winners of the event get to decide the format and venue of the 35th America's Cup, the oldest trophy in international sport.