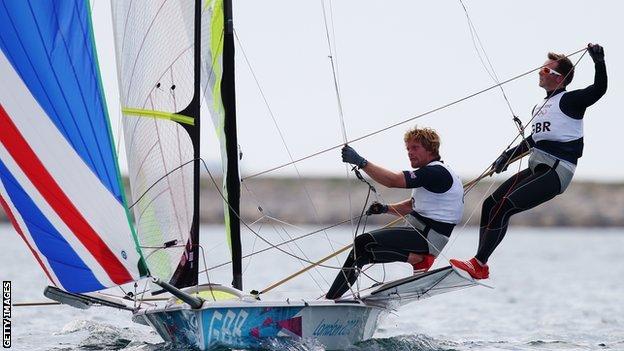 British sailors Stevie Morrison and Ben Rhodes have called time on their 49er partnership after 12 years together.

The Exmouth duo won the 2007 World Championships and finished ninth at the Olympics in Beijing the following year.

They improved to fifth at London 2012 but could only finish 11th at the recent World Championships in France.

"We've had a great run, but I think the result at the Worlds just cemented our thinking that our partnership had run its course," Rhodes, 32, said.

"While we never achieved our ultimate goal of winning an Olympic medal, I think we gave it a pretty good go and I feel pretty proud of what we managed to achieve."

Morrison, 34, added: "Ben and I have sailed together for so long and have been successful almost across generations of 49er sailors managing to stay on top of our game, so we've shown pretty good adaptability and good team skills.

"We've had a really good career as a team but it's time to move on and try different avenues."

The Exmouth-based sailors are both keen to explore sailing campaigns outside of the Olympic classes.

"Stevie and Ben have been fantastic competitors at the front of the world 49er fleet for some years now," Royal Yachting Association manager Stephen Park said.

"They have delivered great performances for Great Britain over the years, but ultimately didn't manage to deliver their best performances at the Olympic Games.

"I am sure they will go on to deliver many more top performances in other forms of the sport, and wish them well for the future."