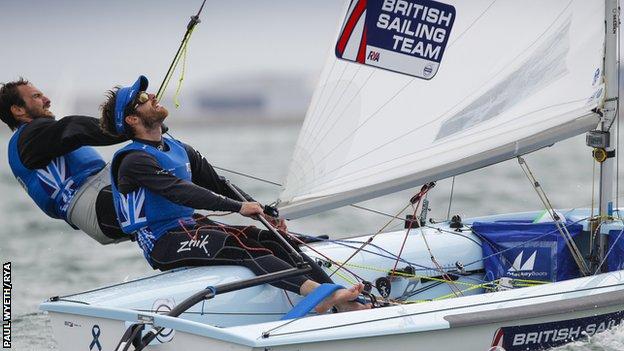 As Luke Patience sat in class, a senior pupil at Hermitage Academy in Helensburgh, his mind would wander to the sea, and thoughts of sailing to victory.

He was able enough as a student, but with the Clyde coast just minutes away, his heart was in his sport and the teenager was in a hurry to begin his new life as a professional sailor.

For Patience, the decision to withdraw from his education had already been made but, perhaps surprisingly, it was a choice that was entirely supported by his parents, who knew their son very well.

A family with a history on water, from fishermen in the north east to sailors on the Clyde coast, Patience had sea in his blood, and the desire to fly higher than most would think possible.

"When I started on this journey of sailing full time, my dad gave me the book Jonathan Livingston Seagull," he told BBC Scotland.

"It tells the story of a bird determined to be more than ordinary."

The book is a classic for people who want to follow their dreams and make their own rules and has inspired for decades. It's a fable about seeking a higher purpose in life, and fulfilling true potential.

In his own bid to fly higher and higher, Patience now has his sights set on winning the Olympic gold medal at the Rio Games in 2016. He says nothing else will do.

In London he claimed the silver with his 470 partner Stuart Bithell; he has since teamed up with double world champion Elliott Willis and the pair are now two years out from their first Olympic campaign together.

"We are just pedal to the metal - two years is not a long time," he said. "It's all highly competitive and will simply come down to who wants it more.

"The silver medal from London whetted my appetite.

"I think about it every day. Lying in bed at night I am so proud of what we did, but coming so close to winning has really spurred me on even further.

"I'm a more dangerous man now. I'm even hungrier to win the gold."

If not a professional athlete, Patience would happily be an artist or a poet. When discussing sailing, he talks not in terms of speed and wind direction; instead he describes his navigation as "playing hopscotch on the dark patches of the water".

He said: "In light winds I'm a snooker player - it's the long game, it's more relaxed.

"In high winds it's more physical, grabbing hold of the boat. When it's like that I'm a boxer; there's more aggression involved."

Like Jonathan Livingston Seagull, Luke Patience is on a journey - and he is clear about his destination.

"The path is all about gold - it has to be. It would be a mistake and a lie to aim for anything other than being the best and to win.

"I remember before the London Games we travelled to Loughborough and got our team kit. That started all the excitement as I looked at the podium tracksuit. That's the one you wear if you win a medal.

"I remember looking at it and saying to myself, am I taking it out or not? And I was lucky enough to take it out of the wrapper."

When I met Patience while we were taking part in the iconic Round the Island Race from Cowes, on the Isle of Wight, we were joined on the boat - a Farr 65 - by the broadcasting legend David Dimbleby. He and Patience discussed Dimbleby's recent celebrated tattoo - the first for the 75-year-old.

"I've always fancied a tattoo," Patience admitted to me after the race.

"What would you get?"

"I think it would have to be a seagull…"