The Emirates team, skippered by Walker, triumphed in the nine-month triennial race after finishing fifth in the ninth leg from Lorient to Gothenburg.

Team Alvimedica won the final leg to ensure all but one of the seven-strong fleet won at least one stage.

Walker, in his third round-the-world race, becomes the first British skipper to win the overall trophy. 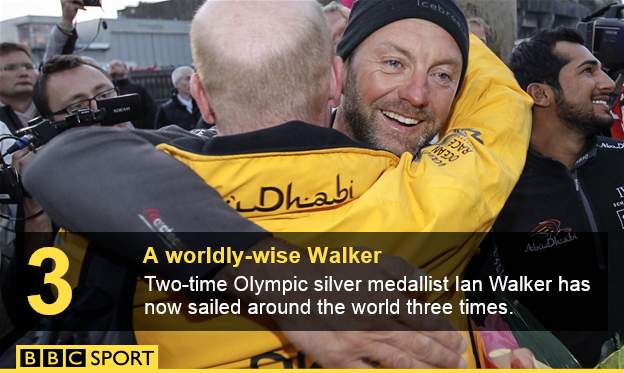 Abu Dhabi Ocean Racing secured top-three podium places in all but two of the legs and won two of them.

Team SCA, who became the first all-female crew in 25 years to win a leg of the round-the-world race, finished seventh.

The Swedish boat, skippered by Briton Sam Davies, were the only all-female crew in the race and the first to compete for 10 years.

The fleet of seven teams, sailing in a one-design Volvo Ocean 65 boat, encountered several dramas as they visited 11 ports across every continent.

Team Vestas Wind were rescued from shark-inhabited waters after crashing on a remote coral reef in the second stage from Cape Town to Abu Dhabi. They missed five legs while the boat was being rebuilt.

At the end of the first leg an ice exclusion zone was introduced after a 300-metre-long iceberg was spotted by organisers, while crews also had to cope with masts snapping in storms.

"Every team and every sailor has won this Volvo Ocean Race - that is the beauty of the event," winning skipper Walker said.

"To sail around the world in such high performance boats remains an amazing achievement that few people will ever experience.

"To share the highs and lows with team-mates creates experiences that will never leave you. Despite the dramas that have unfolded, every sailor will be returning home to their loved ones and every boat will return to harbour."