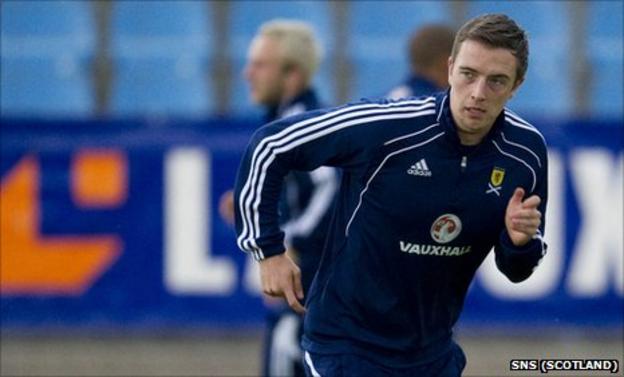 Senior cap Danny Wilson could feature for Scotland's Under-21 side in Thursday's Uefa U-21 Championship qualifier against Luxembourg.

Wilson, who has five caps at both senior and under-21 level, had been called up to the squad with Celtic's Lewis Toshney having withdrawn.

Scotland drew with Bulgaria in their opening qualifying Group 10 match.

All four maintain their place in Billy Stark's player pool for the double-header against Luxembourg and Austria.

Dundee United midfielder Scott Allan, Aberdeen counterpart Peter Pawlett, striker Leigh Griffiths, who is on loan at Hibs from Wolves, and Rangers winger Gregg Wylde are other options for Stark.

Gregg Wylde has been on the bench for us but he has been terrific for Rangers. It does show the strength of our squad

After travelling to the Stade Josy Barthel for Thursday's encounter, Scotland will return to their their regular home ground at St Mirren Park for Austria's visit on Monday.

Wotherspoon believes Wilson's return to the Under-21s is "a real boost" for the side.

"He knows all the boys here so there is nothing different for him," said the versatile Hibs player.

"Coming back, he might be a little bit disappointed [not to be in the senior side] but I think he's glad to be among the rest of the lads and he'll look forward to it.

"You can see the depth of our squad. Gregg Wylde has been on the bench for us but he has been terrific for Rangers, he has been getting on the scoresheet and setting up goals.

"It does show the strength of our squad."