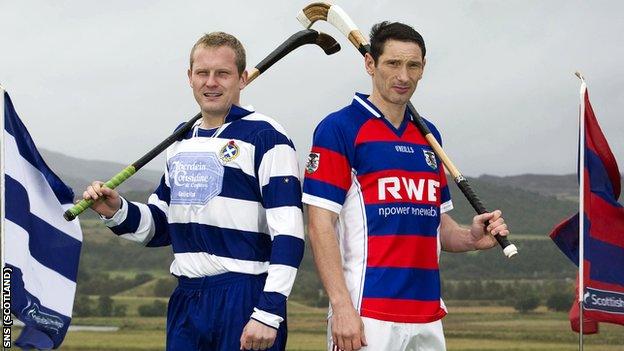 The new shinty season got off to a sensational start with victory at Kingussie for Orion Premier League newcomers Kinlochshiel after the game was switched from Balmacara.

Then, three miles along the road, Lovat pulled off a shock defeat of defending champions Newtonmore.

In the early throw up at the Dell, Gordie MacDonald scored Shiel's first ever Premier League goal after just six minutes, and then again to level after Martin and Barrie Dallas had put the home side ahead.

Early in the second half, internationalist Finlay MacRae killed the game with a hat-trick in 10 minutes, including a penalty, before Ryan Borthwick pulled the score back to 5-3.

At Newtonmore, Greg Matheson was also in hat-trick form for Lovat who last season only just avoided relegation.

He grabbed his in the first 26 minutes of the match and the champions only ate into Lovat's winning lead in the dying stages with a consolation own goal.

John Barr opened early for Glenurquhart at home to Kilmallie. Liam MacDonald equalised, Fraser Heath put the Glen ahead again before MacDonald levelled once more, but Eddie Tembo made the final score 3-2 Glenurquhart with a winner on 72 minutes.

Fort William remain homeless until An Aird reopens in September and are currently playing at Black Park where Robert Walker broke the deadlock for Bute early in the second half but Brian Simpson quickly replied for the only draw in the Premier League.

The match between Inveraray and Kyles was postponed.

Oban Camanachd began life in the lower leagues with a 3-0 victory at Taynuilt in South Division 1. Scott MacMillian got their first on the half hour with a penalty but it only went into the bag for Camanachd when Aiden MacIntyre and Ian MacMilan both scored in the last two minutes.