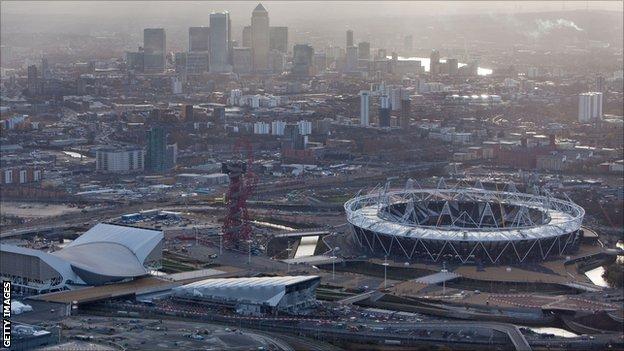 "I think it'll be one of the big events in my life," said a woman in Aberdeen.

Meanwhile, in Dumfries, one man said: "It's not something I'm overly excited about."

What is it that people across Scotland seem to regard so differently?

From Lord Coe and Tony Blair, to Boris Johnson and David Cameron, many voices have billed the forthcoming Olympics as a London Games, for Britain.

Jonathan Edwards, the 2000 Olympic triple jump champion, believes that excitement is growing across the British Isles.

"Clearly, there's the challenge of something which is mainly based in London engaging the whole country," Edwards told BBC Scotland on a visit to Glasgow.

"But my sense is that the country is engaged.

"When you look at the benefit that the Games has brought, not just to London but across the UK in terms of business contracts and the Cultural Olympiad.

"There will be Olympic football at Hampden Park and the Millennium Stadium - and volunteers come from around the country.

"So there are a whole range of things that aren't just London-focused."

It is true that the organisers of the Games have made efforts to engage the whole of the United Kingdom.

Just last month, Glasgow hosted Music Nation - a celebration of music and sporting achievement attended by great Scottish Olympians of the past.

And Edwards also highlighted the Olympic Torch Relay, which aims to take the Olympic flame to within an hour's drive of 95% of the country.

In Scotland, it starts in Stranraer, loops up to Stornaway and Shetland before leaving at Gretna.

But some surveys have indicated that, in general, Scots feel less connected to London 2012 than in other parts of the UK.

Of the people we heard from ourselves in Shetland, Aberdeen and Dumfries, some of the reasons they gave ranged from anger at the billions of pounds of costs, to the simple factor of geographical distance.

Some did feel it was a "Games for Britain", while others did not subscribe to that ethos.

While tickets for events at the Olympic Park in Stratford are in high demand, the same, thus far, cannot be said for the only sport to be staged in Scotland.

A total of eight matches of the men's and women's football will be played at Hampden Park in Glasgow.

Tickets are due to go back on sale later this month following a retail holiday.

But, before that, BBC Scotland had learned that only 20,000 had been sold for the five days of competition.

One insider has also indicated private fears that there could be as many security staff as spectators at some of the women's pool matches.

Games organisers, however, are relaxed about those sales - although they would not confirm numbers.

They believe the nature of the football tournament means that people are waiting to see which teams will visit their local stadium.

Another aspect that is supposed to spread the benefit of the Games throughout Britain is in the form of UK-wide business contracts relating such diverse products as venue construction and official merchandise, to precision race timers and food supply.

The value of contracts to be awarded is around £6bn. So how much of that has filtered through to the Scottish economy?

"We'd always wish for more, and there are certainly new opportunities before the games, and we are continuing to encourage our members to bid for as many contracts as possible."

But perhaps one demographic that Lord Coe and his team is hoping to hook more than any other is the young.

The aim is that, through London 2012, more young people will become excited by sport and feel inspired take part.

The end goal is, in the first instance, healthier living and perhaps a few of them will even go on to win Olympic medals of their own some day.

Like many other schools around the country, this year they are learning about all things Olympic.

Taking some time out from designing and making their very own Olympic Torches, one of the pupils told me she was "about a 9.5" on the excitement scale.

Another little boy said: "I'm even looking forward to the Olympics more than my birthday this year... and Christmas as well!"