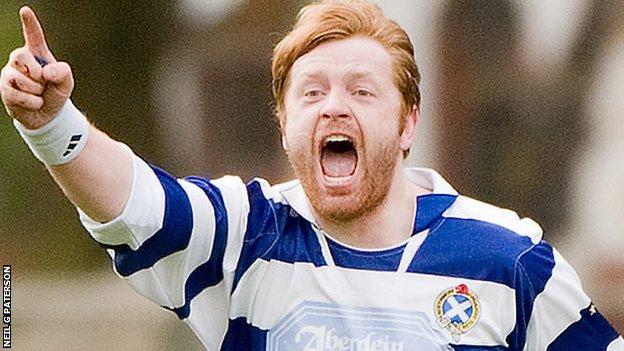 The Co-operative MacTavish Cup is heading for a possible all Badenoch final in June following wins Newtonmore and Kingussie in the quarter-finals.

And there will definitely be a South Division 1 side in the final of the AJG Parcels Celtic Society Cup which saw holders Kyles exit the tournament.

They now play the winners of the postponed tie between Beauly and Glenurquhart, which has been rearranged for Saturday 28 April.

Martin Dallas put Kingussie ahead at Kilmallie, with Ryan Stewart equalising, but second half goals from Fraser Munro and Ronald Ross made it 3-1 to the visitors.

They now meet North Division 1 leaders Lochaber, who eventually had a straightforward 4-0 win on Skye, with second half goals from Ben Delaney, Sean Nicholson, Scott Paterson and Zands Ferguson.

In the Celtic Society Cup for the South area championship, Ewan McMurdo's strike on the hour for Inveraray was the only goal of a tie at the Winterton where they ousted holders Kyles.

Inveraray's next obstacle will be Bute, 3-1 winners at home to Oban Camanachd, who scored first through Malcolm Clark in 41 minutes. But a Hector Whitelaw hat trick - the second and third in extra time - did it for the islanders.

Stewart Scott's double put Taynuilt into the other semi-final with a 3-2 win over Oban Celtic and their opponents will be First Division rivals Aberdour who beat Kilmory 2-1 on penalties after a 1-1 draw.

Lovat went third in the Orion Premiership with a 4-3 win at Kinlochshiel, who now only head their opponents on goal difference and who missed out on a chance to narrow Newtonmore's lead.

Lovat were 2-0 up after seven minutes thanks to Ryan Ferguson and Greg Matheson, with the latter going on to complete a hat-trick. Duncan Ach MacRae, twice, and Keith MacRae replied for Shiel.

South of the border in Bristol, a 1-1 draw in a six-a-side game between the newly reformed Cornwall Shinty Club and London Camanachd means that the teams from the game's two English outposts share the Shinty Shop Trophy.