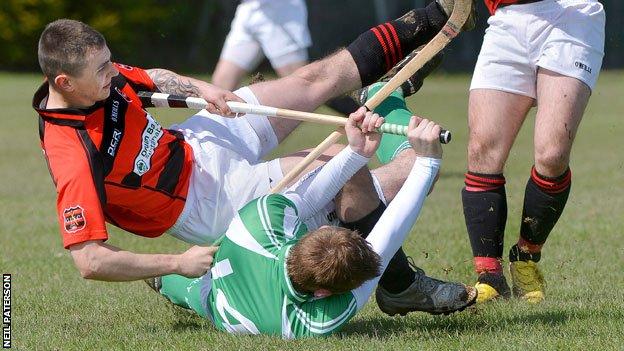 Kinlochshiel, with a 4-2 home win over Bute, and Lovat with the same scoreline at Fort William, both reduced Newtonmore's lead in the Orion Premiership to a single point on a day when the champions had no game.

Duncan Ach MacRae sent Shiel on their way in the 17 minute and Neil Fraser made it 2-0 before Robert Walker pulled one back in the second half.

Fraser and Walker then traded second goals in advance of MacRae wrapping it up with his own second in the final minute.

Fort William were two up and apparently flying through Gary Innes and Brian Simpson but Lovat struck back with a brace including a penalty from Greg Matheson, and contributions from Martin Bell and Fraser Gallacher.

Kingussie's talisman Ronald Ross produced yet another hat trick in their 3-0 away win over Inveraray.

Meanwhile, Kilmallie stay bottom after a 2-0 defeat by Kyles at Strachur with goals in the second half from Ewan Campbell and Rupert Williamson.

Glenurquhart booked the fourth spot in the semi-finals of the Cooperative MacTavish Cup when they overwhelmed Beauly 6-1 away.

Lewis MacLennan opened for Glen and Marc MacLachlan quickly equalised. But Glenurquhart romped through with MacLennan's second, a hat-trick from Neale Reid and an Ian Broadhead own-goal.

Oban Camanachd made an appearance in the Balliemore Cup, the Scottish intermediate championship, as a result of their relegation and cruised through 6-1 at home to Strathglass with doubles from Aidan Macintyre, Andrew McCuish and Matt Rippon.

Marine Harvest North Division 1 leaders Lochaber went two points clear and extended their unbeaten run to five games with a 5-2 away win over Caberfeidh, including a hat-trick from Ben Delaney.