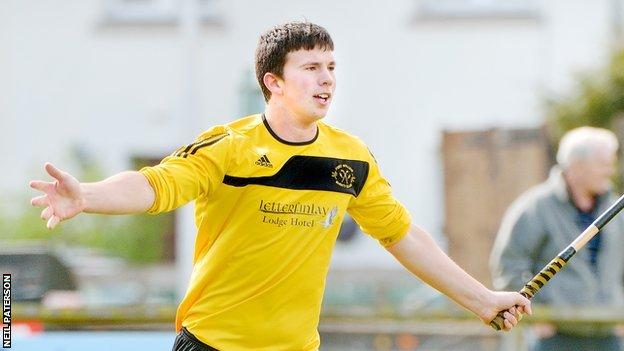 On a day of upsets in the Artemis MacAulay Cup, shinty's second senior national knockout, both last year's finalists went out away from home in the first round, and both to last-minute goals.

And although Kingussie had to come from behind against lower league opposition, they could now emerge as one of the favourites for this trophy.

At Inveraray, holders Kyles went behind to a first-half Gary MacPherson goal but struck back through Ewan Campbell in the second half, only for Chris Crawford to win it for the home side in the dying seconds.

And 2011 runners-up Newtonmore went to Balmacara to meet Premier League newcomers Kinlochshiel and suffered the same fate. This time, Keith MacRae opened for Shiel and Callum Stewart replied for 'More before John MacRae won it for the home side at the death after the visitors' Chris Sellar had been sent off.

Kingussie lived dangerously away to North Division 1 leaders Lochaber, who went two up through Scott Paterson and Ben Delaney. A Lachlan Campbell own goal came to Kingussie's aid, but not nearly as much as Ronald Ross's hat-trick, which was the cornerstone of their eventual victory.

Delaney again and Sean Nicholson also scored for Lochaber but so did Fraser Munro and Rory Borthwick for Kingussie, who finally prevailed 6-4.

A Gordy MacKinnon double in three minutes before half-time took Fort William from 2-1 down to 3-2 up before finally defeating Lovat 4-3 at Kiltarlity.

Lewis Tawse had struck first for Lovat before Brian Simpson's equaliser, but Owen Ferguson soon restored Lovat's lead. Then came MacKinnon's brace and Ryan Campbell extended the Fort's lead, although a late second from Ferguson led to an anxious finish.

Glenurquhart's 4-1 home win over Kilmallie, who had John Stewart sent off, included two from Fraser Heath. It was 4-0 at half-time with contributions also from Neale Reid and David Smart. Ross Lavin got Kilmallie's consolation in the second half.

There were two including a penalty from Roberto Zavaroni as Bute ousted Oban Celtic 5-2 at Mossfield Park.

But following the previous Saturday's double Oban exit from the Scottish Hydro Camanachd Cup, a repeat was avoided in this Oban-based competition when a late Scott MacMillian penalty saw Oban Camanachd through 1-0 away to Glenorchy.

Glasgow Mid Argyll won 2-1 at Taynuilt to complete the quarter-final line up.

In Marine Harvest North Division 1, Beauly's run of miserable form continued when they failed to cash in on Lochaber's cup absence and crached 4-0 at home to Caberfeidh.

And Annie Butterworth, one of a number of women playing alongside men in some shinty teams, was on target for Boleskine as the Foyers side ousted Inverness 4-1 after extra-time in the Strathdearn Cup.