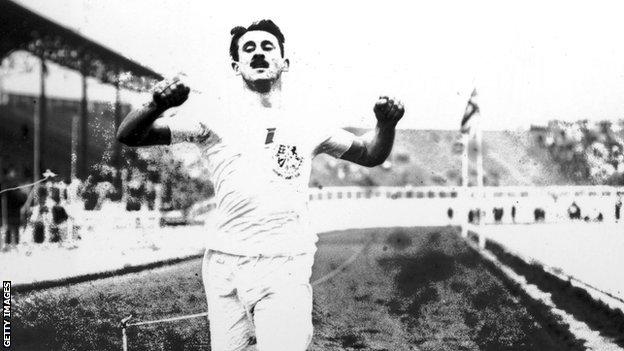 He should be celebrated as a national hero, but it is a little-known story that Scotland's first Olympic track gold medallist won gold in circumstances that left even the athlete himself unhappy.

Born in London, Wyndham Halswelle had been a noted athlete throughout his school career and also at officer training at Sandhurst.

After accepting a commission in the Highland Light Infantry in 1901, Halswelle was sent to fight in the Boer War.

A year after his return to Britain in 1905, Halswelle won both Scottish and British 440 yard titles before international success came the following year.

Athens hosted the 1906 Intercalated Games, an attempt to improve the standing of the Olympic movement after the poorly-received event in St Louis in 1904.

Although these games are not officially recognised today, they were taken seriously at the time and Halswelle rose to the occasion, winning silver in the 400m and bronze in the 800m.

In the same year, Halswelle won the 100, 220, 440 and 880 yard races at the Scottish Athletic Championships at Powderhall, setting two national records.

He missed the 1907 season due to a leg injury, but returned to the track in 1908 in fine form, setting a new world record for the 300 yard distance.

If Halswelle was ready and raring to go for the Olympics, the same can hardly be said for the Games themselves.

In 1908, Rome was the original venue, but an eruption of Mount Vesuvius caused an economic crisis and the government cancelled the Games, with London stepping into the breach at short notice.

However, the 1908 London Games were not to be free of controversy.

Irish athletes, flagging up demands for Home Rule, boycotted the games while a series of rows over flags involving Sweden, the USA and Finnish athletes, who objected to running under the Russian flag, marred the opening ceremony.

The row with the Americans, started by the omission of the American flag from the stadium at the opening ceremony, intensified when the America standard-bearer refused to dip the flag on passing the Royal box.

With tensions raised between the sporting communities of both countries, the controversy was played out to the fullest on the track in the final of the 400m.

Halswelle won through to the final, setting a new Olympic record of 48.4 seconds in his heat, where he lined up against three American runners: William Robbins, John Carpenter and John Taylor.

The drama unfolded as the runners made their way into the final straight with Robbins was in the lead and Carpenter and Halswelle competing for second place.

As Halswelle moved to pass Robbins, Carpenter blocked the Scot, running diagonally and forcing him to the edge of the track and using his elbow to prevent Halswelle overtaking.

Although blocking was allowed by the American Athletics Federation, the Olympics were held under British rules, which did not permit the practice.

The umpire, Arthur Roscoe Badger, cried "Foul!" and the finishing tape was removed just before Carpenter crossed it.

After an hour of deliberation, Carpenter was disqualified and the race was scheduled to be re-run two days later with lanes.

In this manner he bored me across quite two-thirds of the track, and entirely stopped my running

Halswelle was clear that there had been contact from the American: "Carpenter's elbow undoubtedly touched my chest, for as I moved outwards to pass him he did likewise, keeping his right arm in front of me. In this manner he bored me across quite two-thirds of the track, and entirely stopped my running."

And The Times was in no doubt that the blocking was pre-planned by the American runners, calling it "a definite and carefully thought-out plan...contrary alike to the rules that govern sport and to our notions of what is fair play".

Unsurprisingly, the other two American runners refused to participate in the re-run.

Halswelle himself had no taste for it, and ran under duress, after AAA officials insisted.

The subsequent race constitutes the only time an Olympic athletics event has been decided by a walkover.

Halswelle gave up running shortly after, making his swansong at the Glasgow Rangers sports later in 1908.

The tragic postscript to this story came seven years later, when, alongside many great talents of that generation, Captain Wyndham Halswelle lost his life during the Great War.

Commanding troops at the Battle of Neuve Chappelle, he was shot and wounded by a sniper. After receiving treatment in the field he returned to his post, only to be shot through the head by the same sniper.