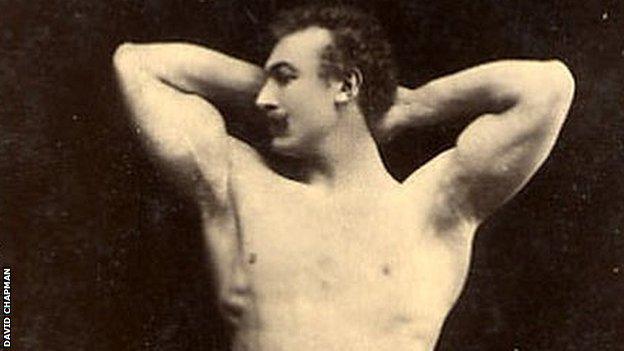 Britain's first Olympic gold medal winner was not born in Scotland, but on the other side of the world.

Launceston Elliot came from a well-established Borders family and was a descendant of the Earl of Minto.

In the days of the British Raj, his great-grandfather was governor of Madras, his grandfather governor of St Helena and Launceston's father, Gilbert, served as a magistrate in imperial India, where Launceston was born, on 9 June 1874.

He was born in India, but he was Scottish to the bone.

Shortly after Gilbert returned to Britain in 1887, the 13-year-old Launceston began to train under the tutelage of the German weightlifter Eugen Sandow, regarded as the founder of modern-day bodybuilding.

Nearly four years later, aged only 16, Elliot competed in the inaugural British weightlifting championships, held in the International Hall of the Café Monico in west London.

A further three years on he was crowned British champion.

In 1896, Elliot decided to enter himself for the first Olympics of the modern era, held in Athens and joined the small band of British athletes sailing for Greece.

Also among this group was fellow weightlifter Lawrence Levy who, as well as competing in the Games, was reporting for a newspaper in Birmingham.

In those days, athletes often competed in a number of disciplines and the Games began for Elliot on 6 April, when he finished fourth in the 100m heats.

Although eliminated, this was the first event of the Games. Elliot, running in the second heat, therefore became Britain's second ever Olympic athlete behind Charles Gmelin, who ran in the first heat.

He was to make up for this disappointment the next day, however, as the Olympic weightlifting events, the single-handed and two-handed lift, began.

The two-handed lift was held first, with Levy, who had earlier withdrawn because of a row over whether dumbbells or barbells should be used, joining the Crown Prince of Greece on the judging panel.

Elliot made it to the final against Denmark's Viggo Jensen, where both men lifted 110kg.

The Prince decided to award gold to Jensen, who had lifted the weight cleanly, while Elliot had struggled.

Levy disagreed, arguing that, as both men had lifted the same weight, they should both be given the opportunity to try a heavier weight.

Plates were screwed onto the 110kg weights and both men tried to lift them.

After another complaint from Levy that Jensen's lift was not legal, the original result was allowed to stand.

The single-handed lift final was scheduled to take place next, and both competitors declined the offer of a rest break.

This was less of a contest; Jensen had injured his shoulder with his last two-handed lift and could not compete with Elliot's lift of 71kg.

Elliot had won. With the win, he became not just Scotland's but also Britain's first Olympic Games gold medallist.

This success was not the end of the Games for Elliot. He competed unsuccessfully in the 14m rope climb, where he finished last, and in the Graeco-Roman wrestling, where, after losing his first bout, Elliot protested so loudly that he had to be escorted from the stadium.

His impact at the Olympics was not confined to the sporting events. The positive impression made by the handsome, well-built Scot was such that he received a proposition of marriage "from a highly placed female admirer".

The Athens Games were not the end of the Olympic adventure for Elliot, as, with the absence of weightlifting from the programme, he competed in the discus at the 1900 Paris Olympiad.

In 1905 Elliot began a career on the music hall circuit, touring throughout Britain, Europe and even South America.

The climax of his show involved a feat of strength where Elliot would carry a bar across his shoulders with a bicycle and rider suspended from either end.

Elliot would then start to turn bearing this weight, getting progressively faster until both bikes and riders were horizontal.

Elliot retired from the music hall circuit shortly after the end of the Great War as he approached the age of 50, and, after a few more years on his Essex farm, retired to Melbourne, where he died on 8 August 1930.

He was born and died in Australia and lived most of his life in England, but his daughter, Nancy, knew how her father would have described himself.

"He was called Launceston, as he was conceived in Launceston, the capital of Tasmania," she said.

"He was born in India, but he was Scottish to the bone."