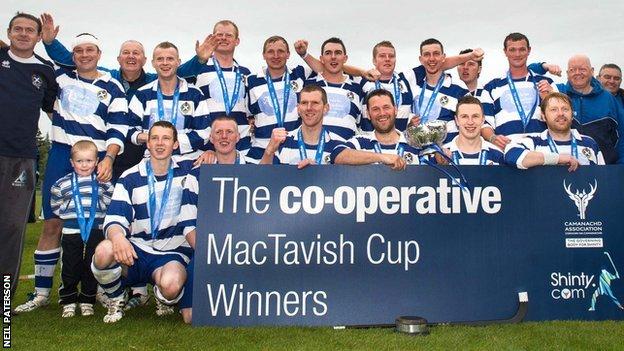 Newtonmore picked up the MacTavish Cup after a comfortable 5-1 win over Lochaber at Bught Parks in Inverness.

Glen MacKintosh opened the scoring inside the first minute, while Chris Sellar grabbed goals either side of the half-time whistle.

Shaun Nicholson pulled one back for the North Division 1 side on 60 minutes.

However, late goals from John MacKenzie and Danny MacRae made sure of a record 38th success in the tournament for the Badenoch side.

It means Newtomore hold all three of shinty's major prizes, having won the Premiership and Camanachd Cup last season.

Their latest cup win came on a day when a defeat at home for Lovat by lowly Kilmallie knocked them off the top of the Orion Premiership as Kyles cashed in with two points against Inveraray.

Lovat's lead in the Premiership went on the line in the early throw-up at Kiltarlity when Kilmallie's Michael Rodger scored the only goal in 64 minutes after Greg Matheson and Grant MacKenzie had missed penalties for each side.

Kyles then followed this up with a 4-1 home win over Inveraray to leapfrog Lovat and go a point clear. The Whyte brothers - Gordon, Thomas and John - got one each as did Robbie MacLeod with a penalty while Ewan McMurdo replied for Inveraray.

And with Fort William defeating Glenurquhart 3-1 in Drumnadrochit, Kilmallie were replaced in the relegation zone by Glen while the Fort went above Kingussie into the top half of the table.

A Ryan Campbell double sent Fort William well on their way and Gary Innes added a late third in advance of James MacPherson pulling one back for Glenurquhart.

Oban Camanachd won their way through to the south semi-final of the Artemis MacAulay Cup against Inveraray with a 2-0 home win over struggling Bute, Andrew McCuish getting both goals.

Beauly ended a long, barren spell in Marine Harvest North Division 1 with a 2-1 home win over bottom side Strathglass whose Ryan Balharry scored first, but two in a single second-half minute from Jack MacDonald sent the game the other way.