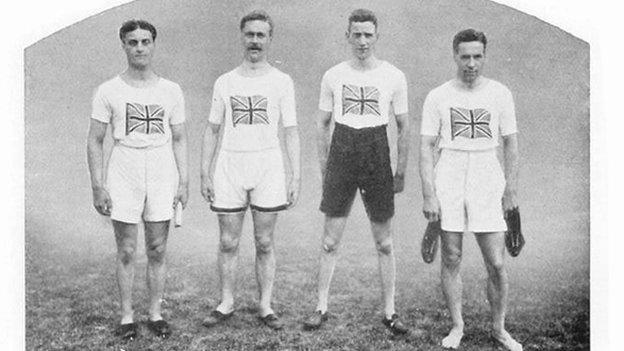 Born in 1892, Macintosh was educated at Glenalmond College and Corpus Christi College, Cambridge, where he represented the university on the athletics track.

Poor form in university and amateur competitions had dogged Macintosh before travelling to Stockholm for the 1912 Olympic Games.

Great Britain broke the worsted a decimetre or two in front.

Early omens for his 1912 Games were not good. Macintosh was eliminated in the first round of the 100m and did not finish in the semi-final of the 200m.

There was another route to a medal open to him. Alongside D. H. Jacobs, V. H. A.d'Arcy and W. R. Applegarth, Macintosh was a member of the GB 4 x 100m relay team.

In the second round of the relay heats, Great Britain had finished second the United States.

An error passing the baton between the first and second leg runners led to the disqualification of the USA team, meaning Great Britain secured a place in the final.

The three-way 4 x 100m final was contested between Great Britain, Sweden and Germany on 9 July, 1912, with Macintosh running the second leg for the British team.

Poor baton passing again meant the world record holders, Germany, who had been hotly tipped to win, were disqualified.

The official report reported, "Möller fumbled the pass very badly, however, so that d'Arcy was not only able to make good the ground lost, but also to get a most useful lead of a metre."

Clinging on to their lead, the Official Report of the 1912 Games recorded, "Great Britain broke the worsted a decimetre or two in front".

Macintosh and his team-mates had fought and won the track gold medal for the 4 x 100m relay.

The Olympic Movement records the official time for the GB team at Stockholm in 1912 as 43.60 seconds.

Currently, the Olympic record rests with the Jamaican team who ran at Beijing in 2008. That team, which included Usain Bolt and Asafa Powell, ran the distance in 37.10.

The son of the Rev William Macintosh and Annie Macintosh of Kinross, Henry Maitland Macintosh was commissioned as a captain into the Argyll and Sutherland Highlanders during World War One.

On 26 July, 1918, at the age of 26, Macintosh died in France from wounds sustained during the Second Battle of the Somme. He is buried in Senlis French National Cemetery.

The Stockholm Olympic Games of 1912 were fruitful in terms of gold medals for Scotland.