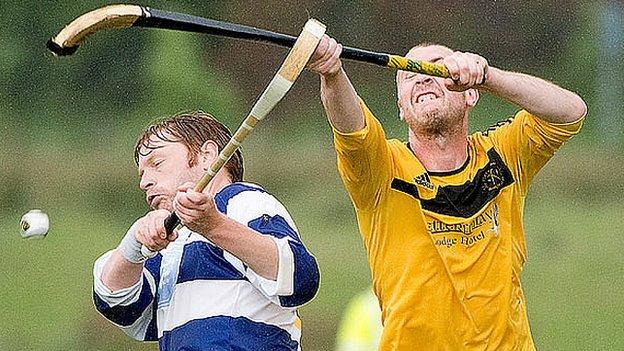 Newtonmore returned to the top of the Orion Premiership victory at Fort William on a day when rain caused the postponement of one of shinty's showpiece finals.

The Celtic Society Cup final between Inveraray and Taynuilt due to take place at Strachur fell victim to a waterlogged pitch.

Inclement weather also caused the Camanachd Cup replay between Kyles Athletic and Glasgow Mid Argyll to be called off.

However, the Kingussie v Kinlochshiel replay did go ahead and it was the visitors who triumphed.

It didn't look good at all for Newtonmore when Fort's Daniel Stewart scored in the first minute but Glen MacKintosh had them level after 25 and then grabbed the winner just before half-time.

'More lead Kyles on goal difference with both teams having played 11 games.

The other top flight match was a basement battle between Kilmallie and Glenurquhart.

The Glen stay second bottom on goal difference after a 2-2 draw, despite scoring first through David Smart.

However, Kilmallie have played three more games than Glenurquhart and four more than Inveraray, who both trail them on goal difference on eight points.

At the Dell, Ronald Ross put Kingussie in front against Shiel both in normal and in extra-time. Calum MacDonald equalised the first time and Duncan Ach MacRae the second.

This strike prompted a goal rush with Keith MacRae netting twice and John MacRae adding another before Rory Borthwick brought the final score to 5-3 in Shiel's favour. They progress to meet Lovat in Kiltarlity in the quarter-finals.

It was Kinlochshiel's second 5-3 victory of the season at the once impregnable Dell, where they also made their Premier League debut in March.

Inveraray v Taynuilt has been rearranged for Saturday 30 June at Strachur.