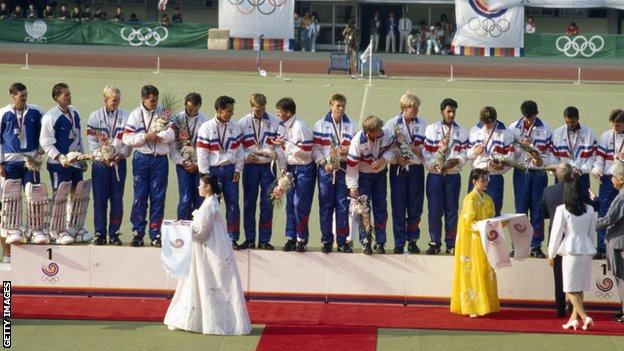 Veryan Pappin won gold as the last-minute substitute for the men's field hockey team at the Seoul Olympic Games.

Scotland's Pappin (second from left, above) was selected as reserve goalkeeper for the 1988 Great Britain Olympic Games hockey squad behind Ian CB Taylor.

Taylor was recognised as one of the best goalkeepers in the world and it seemed that Pappin had little chance of replacing him in the team.

The way to the final

Twelve national hockey teams qualified for the 1988 Seoul Olympics. The twelve were organised into two pools of six.

Germany and Great Britain were part of Pool B, alongside India, Soviet Union, Korea and Canada.

On 22 September, Germany beat the British side 1-2 and went on to win the pool.

The Great Britain team took second place in Pool B and also proceeded to the semi-finals.

Germany played the Netherlands in one of the semi-finals, winning 2-1.

However, Stefan Blocher, one of Germany's key players suffered a head injury from a high ball and did not take part in the final.

In the other semi, Sean Kerly scored a hat-trick for GB to overcome Australia 3-2.

In a fast and hard-fought game, the decision was taken to substitute Taylor in the dying minutes.

Pappin took his place in the goalmouth, where he remained until the final whistle blew.

Great Britain, with Pappin in goals, had beaten Germany 3-1 to win the Olympic gold.

As part of the 1984 team, Pappin had previously won an bronze medal at the Los Angeles Olympic Games.

A physical education officer in the RAF, Pappin won 37 caps for Scotland and 17 for Great Britain.

Veryan Pappin now works in Abu Dhabi where he studies the coastal and terrestrial environment of the Gulf region.

Hockey first entered the Olympic Games at London in 1908, but did not reappear until Antwerp in 1920.

It has remained part of the Olympic programme ever since, with women's hockey being introduced in 1980.

Between the Olympic Games of Amsterdam 1928 and Melbourne/Stockholm 1956, India was the dominant force in international hockey, winning all six Olympic golds.

Olympic hockey games were originally played on grass, with artificial turf being introduced in the 1970s.

Although they continue to play in hockey's top echelons, the move to artificial turf brought an end to India's dominance of the sport.

Hockey since the 1970s has become faster and more skilful, with the change in playing surface also leading to the introduction of new techniques.

Hockey games at the 2012 London Olympic Games will be played at the Riverbank Arena within the Olympic Park.